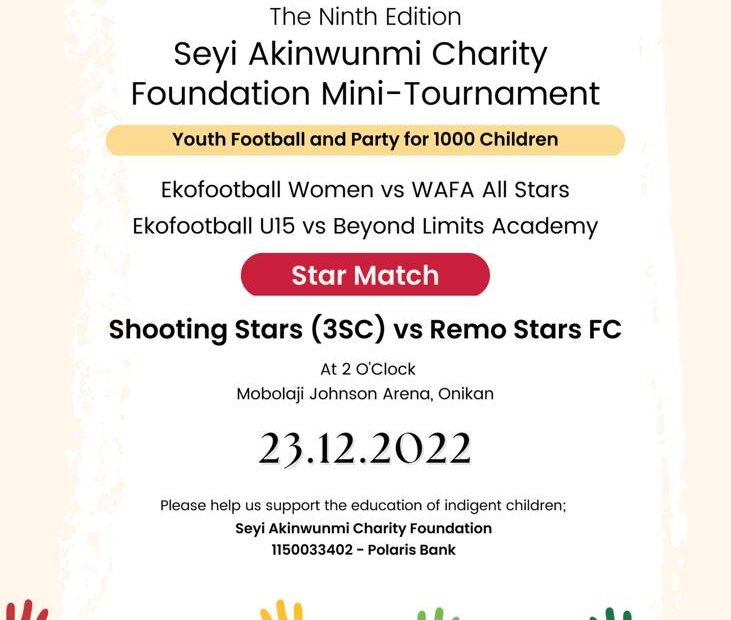 All is set for the ninth edition of the Seyi Akinwunmi Charity Foundation Mini-Tournament, which will come up tomorrow, Friday, the 23rd of December 2022, at the Mobolaji Johnson Sports Arena, Onikan, Lagos.

A special edition tagged ’60 For 60′ as the Initiator, Barrister Seyi Akinwunmi attains the age of 60 about Sixty Students will be given Scholarships to ease their education.

Series of programmes have been lined up for this event. Four exhibition matches involving age grade male and women teams will take place from 9am and the main game of the day, will start by 2pm in the afternoon.

The First Game of The day, will see EkoFootball Women will take on WAFA All Stars, while Beyond Limits’ Academy will play against EkoFootball U-15 team in the second game of the day.

The Star match, for the very first time, will have two Premier League teams Remo Stars and Shooting Stars FC, play a novelty match by 2pm.

Over 40 children between 12 and 15 years have in the past eight years remained in school courtesy of the foundation supporting their education and other related needs.

The foundation has also supported more than 200 indigent students in collaboration with the Courage Education Foundation which was also conceived and co-founded by Seyi Akinwunmi over 17 years ago.