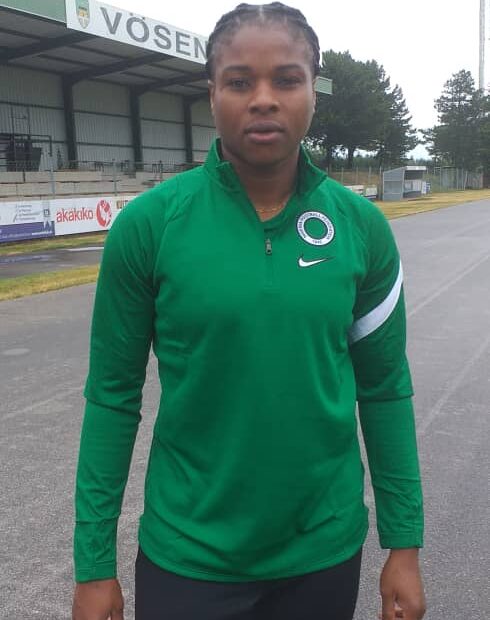 Former captain Desire Oparanozie was recalled to the Nigeria fold after two years absence.
Desire’ first port of duty for the Super Falcons was the training tour in Vosendorf Austria in July preparing for the maiden edition of the Aisha Buhari cup in September.
Here is an all inclusive account of the unofficial friendly match that announced her comeback with an emphatic performance.

It took only 16 minutes for Desire Oparanozie to announce her presence with a goal in an unofficial match as the Super Falcons defeated Slovenian giants Olimpija Lubijana by one goal to nil.

Ngozi Okobi and Goalkeeper Chiamaka Nnadozie were also assessed for the first time this year as the duo missed out in the Turkish women’s cup and the 2021 US Summer series.

Nnadozie Chiamaka, Glory Ogbonna, Ashleigh who was making her debut and Akudo Ogbonna had good understanding as they strayed passes amongst themselves in the heart of the defence for the first 10 mins of the game.
It was barely 15 mins of the game when Desire Oparanozie was brought down and a free kick awarded to the Falcons.

Desire Oparanozie took the resultant free kick ,hitting the ball very hard and high as it sealed into the net helped by an initial dummy initiated by Ashleigh to distract the opposing defence in the 16th minute.

The woodwork also denied the opportunity of a second goal by Desire in the 25th minute.

Coach Randy Waldrum initiated a series of changes in the second half as Yewande Balogun came in for Chiamaka, Joy Bokiri came in for Rita Chikwelu.

A 70th minute penalty was awarded to the Slovenian ladies as Ashleigh collided with her marker in an unruly way.
The resultant kick travelled very high above the goal post.

In the 87 minute Rashidat Ajibade’ goal was ruled off by the centre referee as off side.

The Nine time champions had used the match to wrap up their 8 days training camp in Vosendorf Austria ahead of the Aisha Buhari cup slated for September in Lagos, Nigeria.