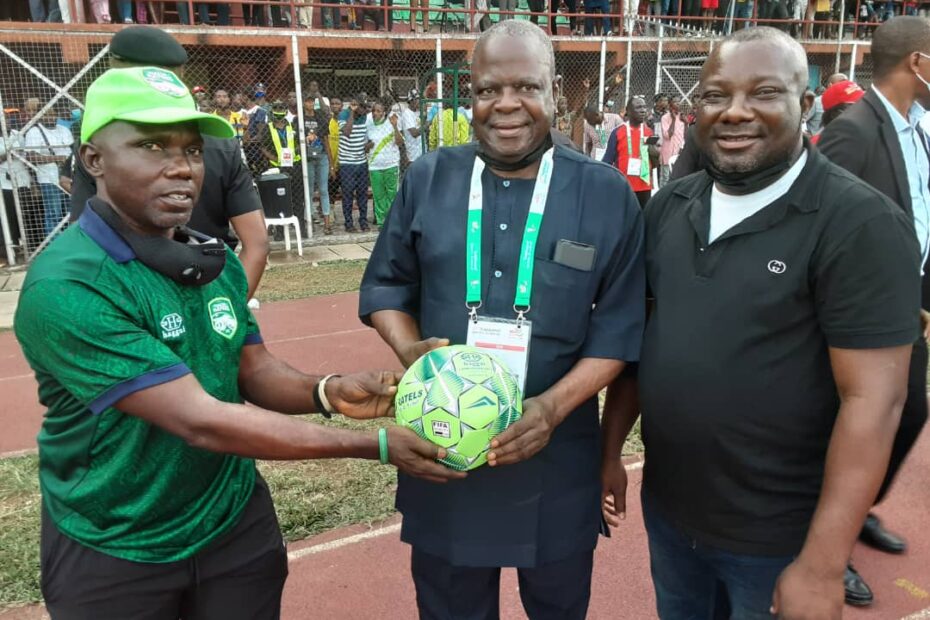 The highly rated Sports administrator was joined by other top personals to give out the customised match balls to all 8 teams that participated at the Football event of the National Sports Festival.

Amos Adamu who was one time Director General of the National Sports Commission was thrilled that a Nigerian Clubside can think of having their own customised match balls, stressing that it is the right step to move the club to greater heights.

Receiving the match balls on behalf of Team Edo, Captain of the side and Deputy Governor of Edo State, Comrade Phillip Shuabu thanked the management of the team for reaching out to all the teams that participated at the Football Event of the National Sports Festival, saying other clubs in Nigeria should emulate the NWFL Championship side, by going into selling of merchandise that will bring in profits.

Barrister Paul Edeh, President of Naija Ratels FC who was represented by Coach Bankole Oloowokere said it was a pleasure to give out the match balls to the football participating teams, stating that football is the sports played most consistently in the world.

“Football is loved by all, that’s one of the reasons we decided to give our customised match balls to all Football participating teams in the National Sports Festival.

“The Naija Ratels customised ball is strong, iconic and reflects the values of the Clubside as we are planning of building a big fan base across all quarters.

Naija Ratels is an NWFL Championship side, based in the Federal Capital Territory, Abuja and is owned by Legal Luminary, Barrister Paul Edeh.