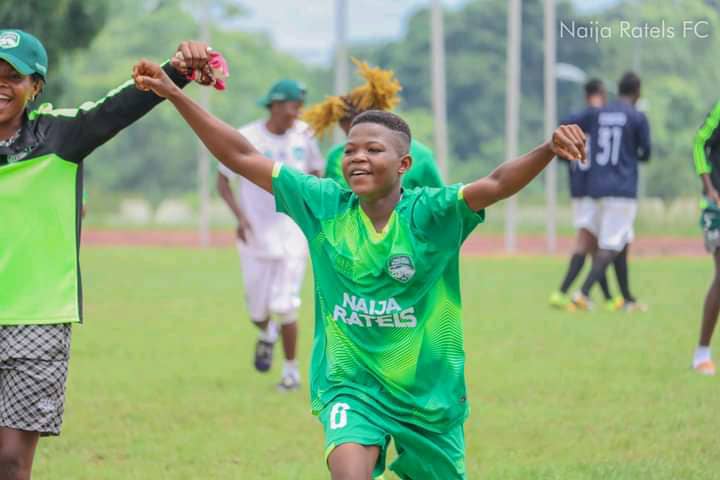 Naija Ratels President, Barrister Paul Edeh on tuesday honoured a N1.6m cash pledge he made to his team, following their promotion to the NWFL Premiership .

Barrister Edeh made the fulfilment after his team ended their Championship campaign as winners of the second tier league, with a 1-1 draw against Adamawa Queens, amassing 10 points from four games in the process.

Presenting the Cash reward to the Captain of the team, NFF first Vice President, Barrister Seyi Akinwunmi stated that he was satisfied with the standard of game seen at the NWFL Championship, noting that soon, players of Naija Ratels will soon be with various national teams.

“It is a pleasure to help fulfil the pledge of N1.6m by the club chairman to the players. I have no doubt that Naija Ratels will do well in the Premiership and today’s achievement is as a result of hardwork and dedication that the players and technical crew have put in place for some time now.

“Am also proud of the products of Eko football and our dream of developing women football in various stages and state is coming to reality.

Club Chairman, Barrister Paul Edeh who affirmed his determination to help the team achieve even more glories, said it is natural for him to fulfil his promise he made to the team, before the beginning of the league.

“I am fulfiled and satisfied with what these young girls have been able to achieve. It’s not an easy task, but they were determined and played like a team all through the Championship season.

“In addition to the N1.6m pledge, the Head Coach of the team, Bankole Olowookere will also be given a plot of land in Abuja for the great job he has done with the team.

Naija Ratels gained promotion to the NWFL Premiership after playing four Championship games, winning three and drawing just one in the process.