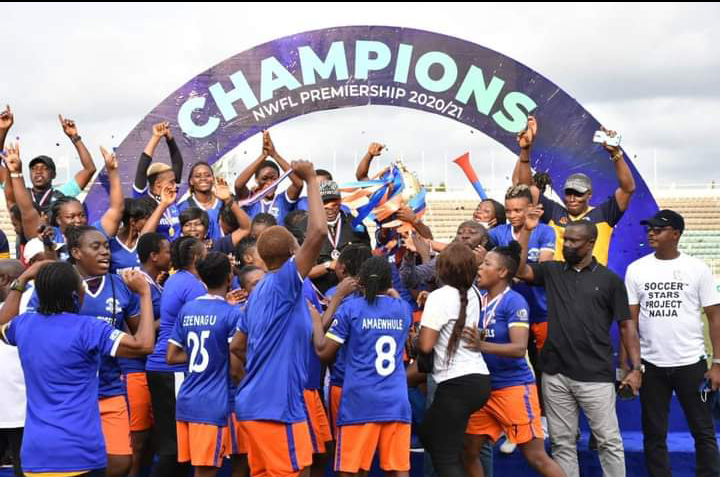 The Chairperson of the Nigeria Women Football League, Aisha Falode, has called on all the clubs in the three tiers of the Nigeria Women Football League and the generality of the women’s football family members in Nigeria to muster support for the country’s sole representative in the CAF Women’s Champions League, Rivers Angels FC of Port Harcourt ahead of their participation and quest to win the maiden edition of the CAF Women’s Champions League title, later in the year in Egypt.

Falode, who is also a board member of the Nigeria Football Federation, said Friday morning in Lagos that, Rivers Angels FC are not alone in their quest and desire to make Nigerian women football sustain the country’s leadership in the game which started way back in 1991 when the country’s national soccer team, the Super Falcons, won the Nation’s Cup and picked the continent’s ticket to play at the FIFA Women’s World Cup in China. And afterward, Nigeria has played in all editions of the FIFA Women’s World Cup till date.

She tasked the players and officials of Rivers Angels FC not to be disillusioned by the loss of the WAFU B Qualifiers Champion’s trophy to Hassacas Ladies of Ghana, but be encouraged by the opportunity to qualify to play in the CAF Women’s Champions League proper later in the year in Egypt.

Falode said: “The loss to Ghana in the final WAFU B Qualifiers game, is a pointer to the huge challenges that await Rivers Angels FC at the main competition in Egypt, which would witness a convergence of the best clubs from each of the African regions.

“The result of the WAFU B Qualifiers final game is a warning to Rivers Angels FC that they should intensify their preparations and focus on the bigger challenges coming up in Egypt. Nigeria must as a matter of necessity continue its superiority and dominance over other countries on the continent.

She added: “Perhaps if the girls had won the WAFU B Qualifiers trophy on a plate, they wouldn’t see the importance of bigger preparations for the main competition. The qualifiers in Abidjan were an eye-opener to what awaits teams in the main competition in Egypt and a confirmation that Egypt 2021 is big deal, which must be taken seriously with all matches played.

“Rivers Angels FC should see each game that would be played at the main league in Egypt as a Cup final. This is the only way the players and officials of the club can keep encouraging the Rivers State government, the club’s sponsors.”

Falode, who is also the Director of Organisation of the forthcoming Aisha Buhari Invitational Tournament, assured Rivers Angels FC of the support of the board and Secretariat of the Nigeria Women Football League in their quest to conquer Africa.