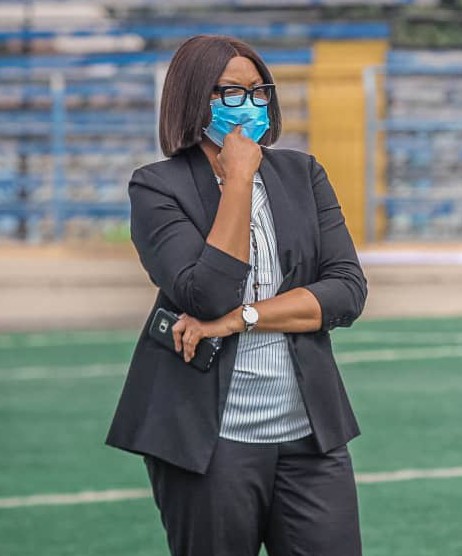 The Chairperson of the Nigeria Women Football League, Aisha Falode, has applauded all the 14 clubs in the NWFL Premiership for conducting themselves patriotically and professionally as the 2020/2021 season runs into the Super Six challenge and the bottom Eight battle.

The Super Six and Bottom Eight were adopted by the clubs in a Virtual meeting to determine the champion and relegated teams at the end of the season on April 25.Falode, noted that despite the situation of the Covid-19 pandemic, the clubs comported themselves very well as they strictly ensured safety protocols before and after games all through the first round of matches.

She added that: “In the entire 13 weeks of the First Round, there was no crowd violence in any of the 14 venues across the country.

This is quite commendable and with situations like these, the women’s league will continue to grow and develop faster.”The NWFL boss was full of plaudits for the clubs for their patriotism and love for Nigerian football especially at a time when the country could have been left out of the much anticipated CAF Women Champions League.

“But the clubs rallied round and called for a meeting where their decisions were put to votes leading to the early conclusion of the season to enable Nigeria present representatives for the CAF Women Champions League.

This has been the dream of women’s football players, club owners, the media and other proponents, for so many years.””The result of this, is the re-emergence of the Super Six after earlier decision to play a straight league of 132 matches over 26 weeks.

The Super Six has been slated for the Dipo Dina International Stadium, Ijebu-Ode from April 19 to 25. Here the champion for the 2020/2021 season will emerge, so also Nigeria’s representatives for the CAF Women Champions League.

I wish the six clubs ; Bayelsa Queens, Delta Queens, Rivers Angels, Edo Queens, FC Robo and Sunshine Queens, goodluck as they battle for the title and tickets for the CAF Women Champions League.

“I once again congratulates the NWFL Premiership clubs for their patriotism and love for Nigeria Women Football.

It’s my prayers that Nigeria will come out triumphant at the end of the inaugural CAF Women Champions League as appreciation for the patriotic gestures showed by the 14 NWFL Premiership clubs,” Aisha Falode, said.