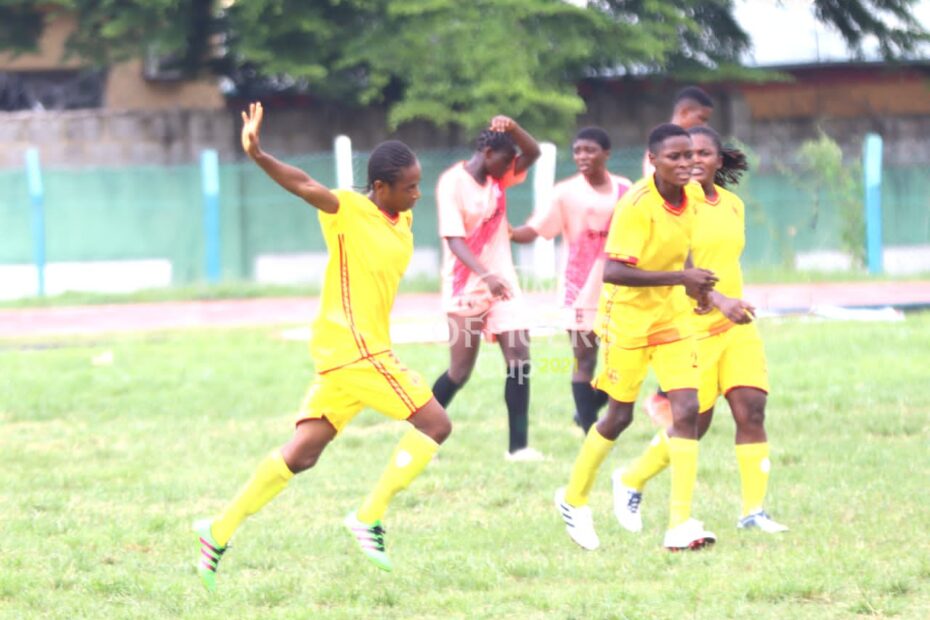 The first game of the day between Royal Queens of Warri and Honey Badgers of Makurdi ended in a 1-1 draw.

Honey Badgers came from behind to pick an important point against Royal Queens on thursday morning, in the first game of the day 5 of the 2021 Flying Officers Cup.

In-form teenager Atume Doosur got one back for her side in the 69th minute, after Ayo Arowokeye had scored for the ‘Canadian geese’ in the in the 54th minute, through a rebound that came from Vera Samuel’s free-kick.

The second game of the day from Group C ended 1-0 in favour of SGH Sports Academy Amazons over WACO Ladies.

Damilola Adebayo in the 59th minute scored the lone goal of the match for the Lagos based side. She outsmarted Best Funmilayo, shooting with her left foot to beat experienced goalkeeper, Abani Osinachi.

Confluence Queens seat at the top of Group C with six points from two games followed by SGH Academy and Sunshine Queens with three points apiece while WACO Ladies are without a point.

In Group D, Edo Queens scaled through Lakeside Queens defensive solidity to secure a 3-0 win with the three goals coming in the second half.

After having majority of ball possession without breakthrough, substitute, Emem Essien headed in a beautiful cross from Rebecca Ajimuda in the 60th minute for the Obaseki Ladies first goal of the game.

Emem Essien scored her second goal of the game in the 91st minute for Coach Wemimo Mathew’s side before completing her hat-trick in the 93rd minute.

Mercy Idoko in the 53rd minute gave the Solid Babes the lead from a very close range.

Substitute, Ayatsea Hembafen doubled Nasarawa Amazons lead before goalkeeper, Chukwu Uchenna saved a penalty for the Amazons in the additional minutes of second half.

Edo Queens with a maximum of six points from two games occupy the first position in Group D while Nasarawa Amazons with three points moved to the second position ahead of Danaz Ladies FC (3 points), and Lakeside Queens (0 point).