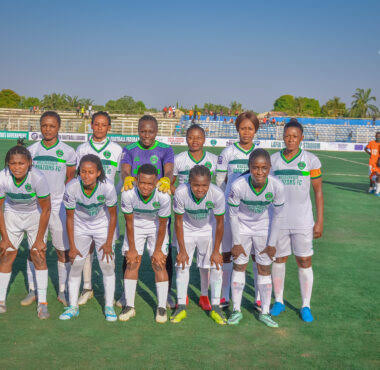 A very strong side tutored by Christopher Danjuma who was a highly succesful defender as a player. He was a rock of a defender with strength, vision, an adept tackler and had an awesome organisational leadership skills.

The ‘Solid Babes’ have won the NWFL Premiership title twice in 2013 and most recently 2017 and were recently overthrowned by Bayelsa Queens as AITEO Cup Champions.

Out of the 16 participating teams in this year’s Flying Officers Cup, Nasarawa Amazons can be regarded as one of the favourites to lift the title. Every box required for success is ticked and they boast of a squad rich in talent and in Christopher Danjuma, they have a Manager who is renowned for success.

The team boasts of a blend of youth and experience and this mixture, may perhaps be an advantage for them. Amarachi Okoronkwo, Maryam Ibrahim, Dooshima Tarnum, Loveth Edeh, Adoo Yina and many more are some of the great talents the team posseses.

Amarachi Okoronkwo, the Nasarawa Amazons midfield general would be the heartbeat and fulcrum of the ‘Solid Babes’ with her great vision, creativity, ball control and dribbling ability in small spaces. She is also comfortably able to effectively create opportunities and goals for both her teammates and herself.