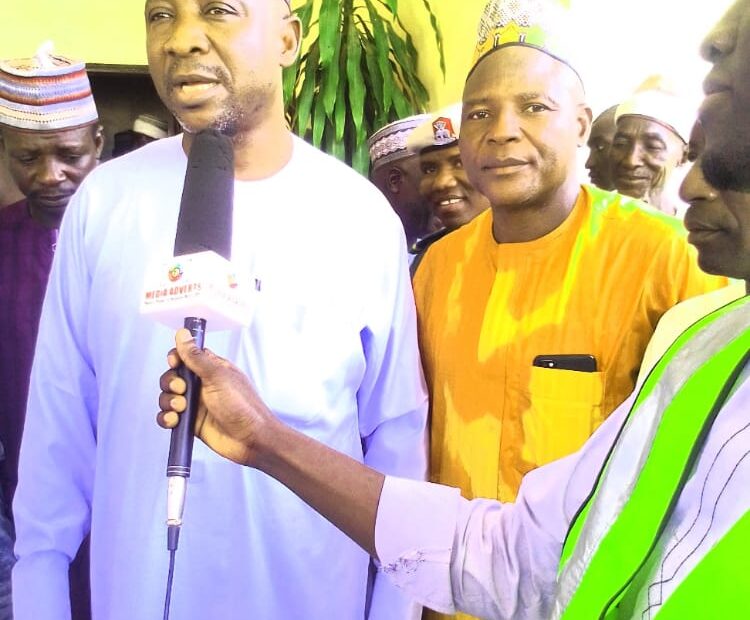 Thousands of supporters and sports lovers  recieved Alh. Ibrahim Musa Gusau as the newly elected NFF President visited the Deputy Governor of Zamfara State, Hassan Nasiha and the Emir of Gusau,  His Royal Highness, Alh.  Ibrahim Bello to seek for their blessings.

Alh. Ibrahim Musa Gusau who  was last week elected as the NFF President on Friday during an elective congress in Benin was first recieved by the Deputy Governor of Zamfara,  Nasiha at  his office in the State Government House.

The Deputy Governor, formally congratulated Alh. Gusau on behalf of the people of  Zamfara while calling on the new NFF supremo to revitalise the fortunes of Nigeria football.

Responding, the new NFF boss thanked the No. 2 citizen of the state for his  unflinching support and vowed to use his administrative and managerial skills in sports to take Nigeria Football to an enviable height.

In the same vein, the new NFF President, Alh.  Ibrahim Gusau payed homage to the Emir of Gusau, HRH , Alh.  Ibrahim Bello to seek  for his royal blessings.

The new NFF President who holds the title of (Kigon Gusau) one of most revered titles in the Gusau Emirate Council was recieved by the Emir in his Palace.

The Emir prayed for the success of the Gusau led NFF Exco and called on the Zamfara State FA Chairman to be a good  ambassador and representative of the state and Nigeria by extension.

The NFF President promised an all inclusive administration and added welfare package of players and staff is top on his agenda and moving Nigeria Football to pinnacle is his utmost priority.

Alh. Gusau was accompanied by Sokoto State FA Chairman, Alh. Nasiru Sa’id and other sports stakeholders in the state.