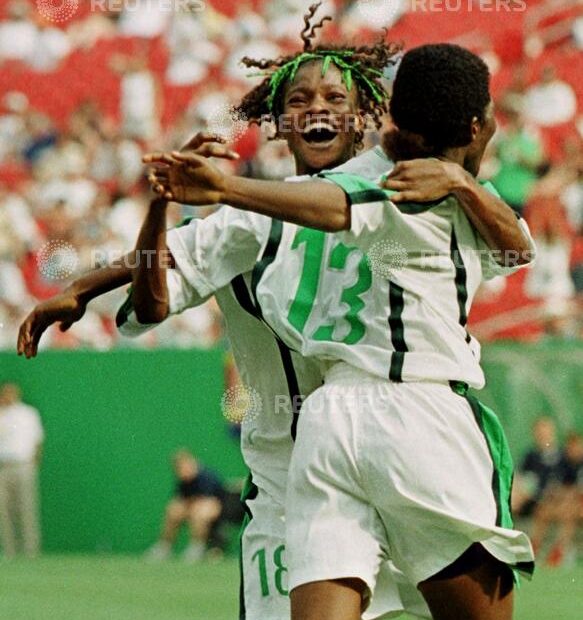 The Super Falcons’ class of 1999 that reached the quarter finals of the FIFA Women’s World Cup staged in the United States of America will be the star attraction of the 3rd NFF-Aiteo Football Awards holding at the Banquet Hall of Eko Hotels & Suites, Victoria Island, Lagos on Monday evening.

Ably led by Captain Florence Omagbemi, the Falcons defeated North Korea 2-1 at the Rose Bowl in Pasadena with goals from Mercy Akide and Rita Nwadike, before losing 1-7 to the USA despite taking a second-minute lead through Nkiru Okosieme. Defeat to the Americans in Chicago stirred something in Africa’s lone flag-bearer at the first FIFA Women’s World Cup to feature 16 teams.

In their next match, the Super Falcons flew past Denmark 2-0 at the Jack Kent Cooke Stadium near Washington DC, the goals coming from Mercy Akide and Nkiru Okosieme. In the quarter finals, at the same venue, the Nigerian girls stormed back from three goals down to Brazil in the first half to tie the game 3-3, with Prisca Emeafu, Nkiru Okosieme and Nkechi Egbe the scorers. Brazil won in extra-time, in what was the very first time a women’s competitive game was decided by the golden goal. This was after 104 minutes.

“The performance of the Super Falcons in that tournament remains etched in the memory and it is important that we honour them with a special recognition award,” said President of NFF and FIFA Council Member, Mr Amaju Melvin Pinnick.

Fifteen members of that 1999 squad, as well as Coach Ismaila Mabo, will be on hand at the Banquet Hall of Eko Hotels & Suites on Monday night. Eight of them are being flown down from the United States of America. Sadly, attacking midfielder Ifeanyi Chiejine died last year.

It would be recalled that at the first edition of the awards held in February 2018, and attended by FIFA President Gianni Infantino and then CAF President Ahmad (among a clutch of political and football juggernauts), the 1980 class of Green Eagles led by ‘Chairman’ Christian Chukwu which won Nigeria’s first AFCON title, was specially recognized. At the second edition in April 2019, also attended by notable football and political bigwigs, it was the turn of the 1994 class of Super Eagles, which won Nigeria’s second AFCON title and played at the FIFA World Cup for the first time, to be specially recognized.

Also to be honoured on Monday night, at an event to be attended by the Secretary General of FIFA, Ms Fatma Samoura, is Princess Bola Ngozi Jegede, a respected pioneer sponsor, promoter and galvanizer of women’s football. Princess Jegede, who is also a former Board Member of the Nigeria Football Federation, founded and funded the team, Jegede Babes.