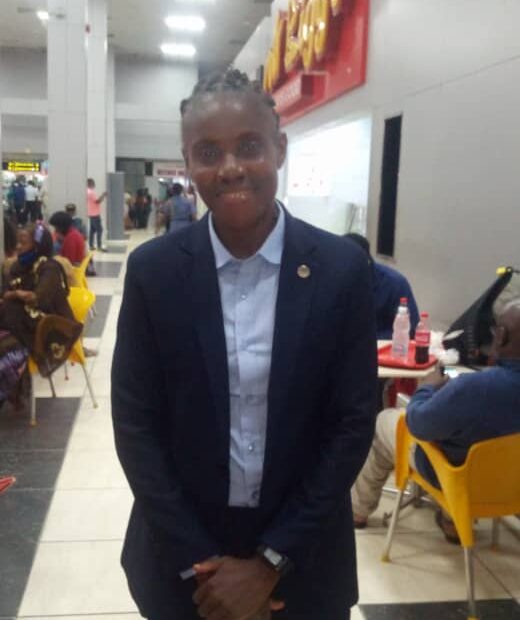 Nigeria’s FIFA Woman Referee Patience Ndidi Madu left Lagos on Tuesday night 13 July 2021 via Lufthansa Airline through Frankfurt on the second segment of her journey to Tokyo Japan for the Olympic Games slated from next week July to August 2021.
She had flown yesterdayevening from Enugu to Lagos to connect this flight to Tokyo to join her colleagues from other confederations for the Games which includes two sets of Women referees as well as two for the Men referees plus two Men for the VAR to represent CAF at the Games tournament.

Patience Madu is an Elite A FIFA badge Referee. An experienced Referee who has handled important matches in the NPFL like the First Television match in the NPFL involving Akwa United and Dakada FC this season. She also officiated the important Vandresser, Shooting Stars NNL match in the second tier men’s league.

She led Women referees in the recently concluded NWFL Super 6 in Ijebu Ode where she officiated the opening and final matches in Ijebu Ode.

She officiated the Olympic qualifying match between Ghana and Liberia.
She was the fourth official for Cape Verde Mozambique for the men AfCon qualifier.

She officiated one of the group stage matches in the Men’s Confederation cup in Benin Republic.

She will be handling the U20 women World cup qualifying match between Benin and Niger involving all Nigerian delegates as officials later in the year.

She is the second Nigerian Referee to grace the Olympics.

She is almost done with her PHD studies from the University of Nigeria, Nsuka.

Referee Madu also passed in all the pre-Olympic Games physical fitness tests conducted on Wednesday 09 June 2021 by the Nigeria Football Federation in Abuja on behalf of FIFA.

Bola Abidoye was the first Nigerian woman Referee to officiate in the Olympic Games.