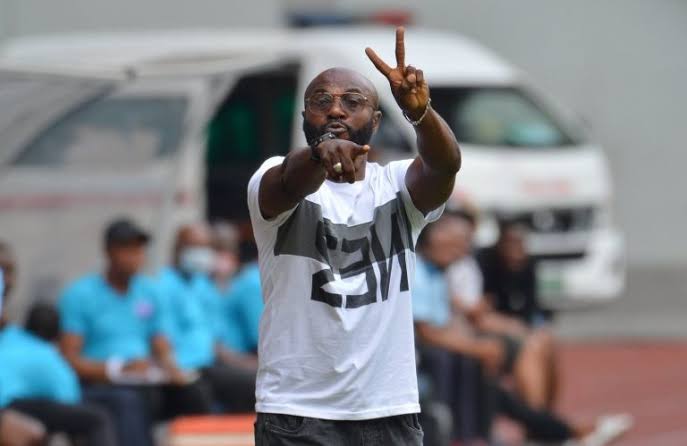 Abia Warriors gaffer Imama Amapakabo has said there are a whole lot of positives to be taken from his side’s huge loss to the Solid miners at the Lafia city Stadium.

The match day 18 fixture of the Nigeria Professional Football League (NPFL) saw Nasarawa United run the show as Imama Amapakabo was forced to watch Ojo Olorunleke pick the ball out of his own net on five occasions.

Although Abia Warriors scored three goals in the encounter but Godwin Obaje’s strike inbetween Abdullahi Fatai’s brace was not enough as Ikenna Offor, Chinedu Ohanachom and a hattrick from Silas Nwankwo condemned the Ochendo babes suffered their worst defeat this season.

Speaking after the game, Imama Amapakabo seemed not to be perturbed by the outrageous scoreline and he drew positives from game.

“Exciting game no doubt, he said, it is not everyday you get to see score lines like this, so I feel its a plus for the league”.

On the display of the home team. “They are a good attacking side no doubt, they did well in attack, and we got punished when due”.

“Though It would have been really exciting if the game had ended 5-5. But unfortunately it ended 5-3 and kudos to Nasarawa United”.

On the general assessment of the game, the gaffer revealed that his side will have to take a whole lot of positives from.

“The league is still on. I think we have about twenty, twenty-one games to go and I believe we are the team with the highest number of goals on the road. So there are alot of positives for us to draw from, He concluded”.

Abia Warriors will at the Okigwe Township Stadium host Plateau United while Nasarawa United will be guest at table topping Kwara United on MD 19.