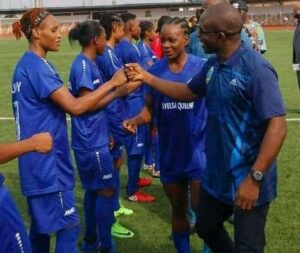 The official opening game of the season between Delta Queens and defending Champions, Rivers Angels ended in a barren draw.

Bayelsa Queens picked a 0-3 away win in Akure against Sunshine Queens as Anjor Mary converted two goals.
Sunday Juliet opened scoring for the Yenegoa based side.

Second half goals from Adugbe Olamide and Agama Ziperekefhege lifted newcomers, Naija Ratels to a 2-0 win over Osun Babes.

Edo Queens picked a 0-2 away win against another newly promoted side, Adamawa Queens.

The Lagos Land-Ladies as FC Robo Queens are fondly called kicked off its campaign with a 2-0 triumph against Abia Angels.