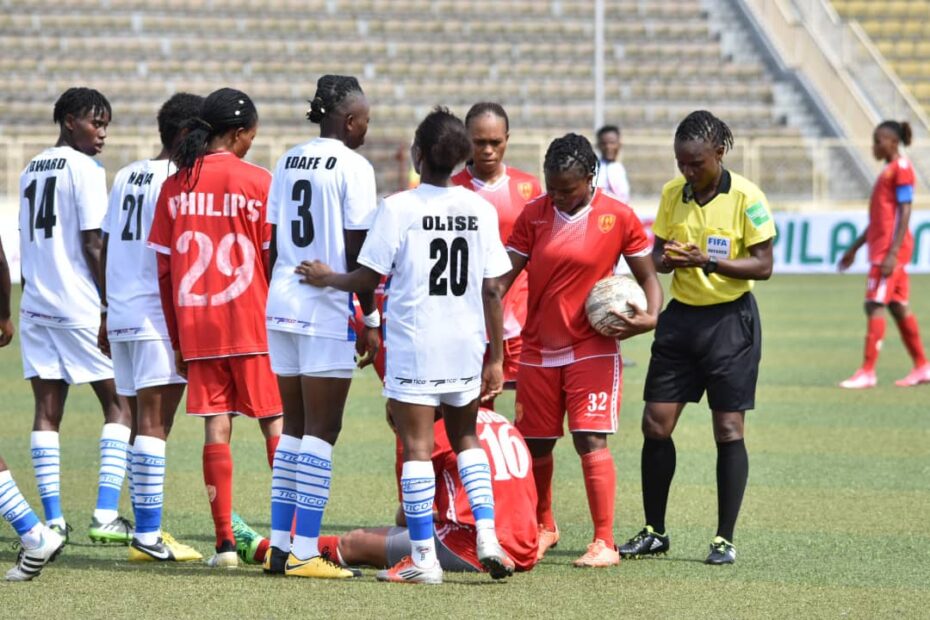 In the match at the main bowl of the Dipo Dina Stadium in Ijebu-Ode, Sunshine Queens made their intentions known immediately the match started by putting pressure on their opponents’ defence.

Five minutes into the game, the Akure-based Queens’ pressure paid off with forward Sunday Abigail scoring from Aminat Yakubu’s cross to put them in the lead.

Bayelsa Queens’ forwards Anjor Mary and Charity Reuben began to trouble the Sunshine Queens’ defence in search of the equaliser which eventually came in the 31st minute.

In the second half, there were no clear-cut goalscoring chances as both sides were being too careful in order not to to concede.

Sunshine Queens’ coach, Wemimo Mathew, later said her players were able to control the game and did a fantastic job in the encounter.

Mathew said the aim of the team was to win the tournament, which she noted had started on a good note.

“I think they did well. We were able to control the game and I think a 1-1 draw is still okay for now and we will take the game one after the other,” she said.

Also, the skipper of Sunshine Queens, Goodness Onyebuchi, said the result was not a bad one.

“When playing against a Bayelsa Queens side with some of the best quality players of the league on their side, you should expect nothing better,” she said.

Head Coach of Bayelsa Queens, Moses Aduku, said his team conceded the goal as a result of loss of concentration from his left full-back.

Aduku, who said it was not a bad game, added that it was just the first match and his girls did not warm into the game on time.

“We will go back to the drawing board and improve on our performance,” he said.

In the other encounter of the day, Rivers Angels of Port Harcourt were held to a 1-1 draw by FC Robo of Lagos.

Vivian Ikechuckwu scored first for Rivers Angels in the 46th minute, while Monday Gift equalised in the 87th minute for FC Robo to make it 1-1.

The tournament will continue on Tuesday with three matches involving the six participating clubs.

However, Sunshine Queens’ fixture against Edo Quens has rearranged by the organisers from 2pm to 10am at the main bowl ofth Dipo Dina Stadium.