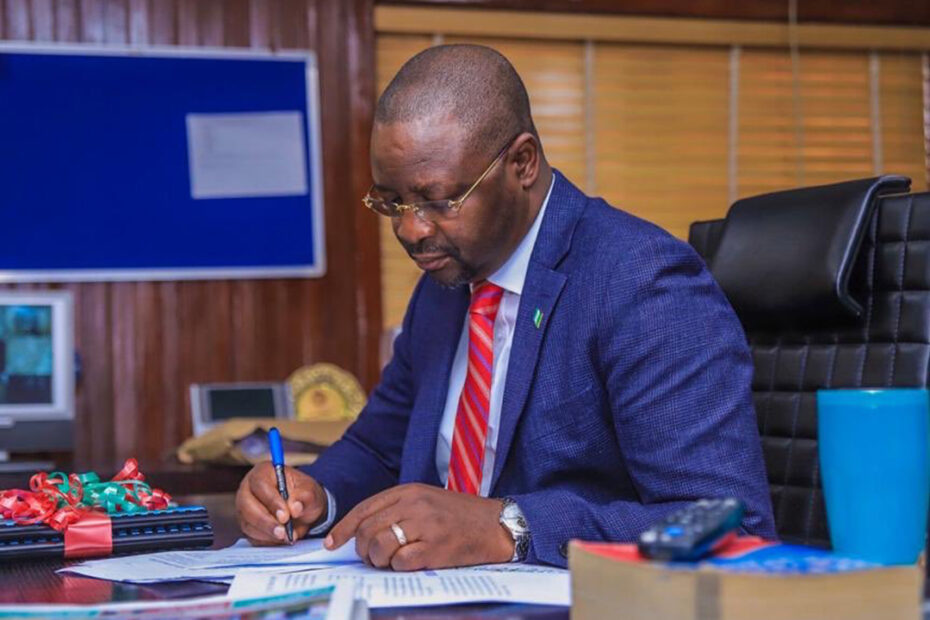 In just over two years in office, Nigeria’s Sports Minister Sunday Akin Dare has broken many performance records and is looking more like a man on the pedestal to more successes.

History will remember him as one man who defied the odds to excel where some of his predecessors failed.

At the 2008 Olympics in Beijing, Team Nigeria won 3 Silver and 2 Bronze medals to finish 57th on the overall medals table. Between 2008 and 2016, Nigeria has performed woefully at the games but in 2020, Dare led Team Nigeria to two medals, One Silver and One Bronze to help erase the sad memories of the last 13years.

It is very important to state here that the outbreak of the Covid 19 pandemic negatively affected Team Nigeria’s preparation for the games as most of the sporting Federations couldn’t travel out in good time, to commence preparations, however, the athletes and the Ministry were able to put behind them these setbacks to a make a mark in Tokyo.

Dare and his team were able to motivate the team, morally and financially ahead of the games. That perhaps explains the reason why the ‘gallant’ Team Nigeria defied all the odds to excel.

In less than 6 weeks, the Sports Ministry under the able leadership of Sunday Dare have also gone ahead to silence it’s critics with a sterling performance at the Under 20 World championship in Kenya.

Nigeria’s U-20 track and field athletes made history at the biennial World Athletics U20 championships after finishing third on the overall medals table with an unprecedented haul of four gold and three bronze medals.

The best Nigeria had achieved on the medals table prior to the just-ended event in Kenya, was her seventh-placed finish at the third edition of the championships in 1990 in Plovdiv, Bulgaria, where they won two gold, two silver and two bronze medals.

To cap it all, Team Nigeria’s contingent to the Paralympic games have continued to perform wonders.

With four gold, one silver and five bronze medals, Nigeria won ten medals with only 22 athletes.

These laudable achievements only go to show that the dedication and passion the Sports Ministry under the leadership of Sunday Dare is putting into achieving success at all levels of sports is gradually yielding dividends. So far, Nigeria has won over 20 medals from 3 global sporting events and have also succeeded in breaking existing records at all levels.

It will be recalled that the Sports Ministry under Sunday Dare, set up the Athletes Welfare scheme, which is the first of it’s kind in the history of sports administration in Nigeria. This programme is designed to help retired and tired Nigerian athletes with financial grants. That singular move, has further made present Nigerian athletes to have confidence in the Ministry of things being done differently and has increased their level of dedication and patriotism to national service.

Beyond that, the ministry also provided scholarship for four young Nigerian athletes to study in the United States of America.

According to the Sports Minister Sunday Dare, the intention is to encourage budding talents to add formal education to their first love, sports.

It is also important to state here that the Minister has always emphasized on equal attention to youth and sports development. Unlike some of his predecessors who concentrated more on the sports sector, Dare has done excellently well in the Youth Ministry. Some of his notable achievements include

Let’s not also forget that it is under the leadership of Sunday Dare, that the Daura stadium in Katsina state got total renovation.

In just over two years, Sunday Dare has left tongues wagging as athletes, officials and key stakeholders who once questioned his choice as sports minister when he was first appointed, are now singing his praises to the heavens, hoping that in four years, he would have taken Nigeria sports to that enviable height we all have always dreamt of.