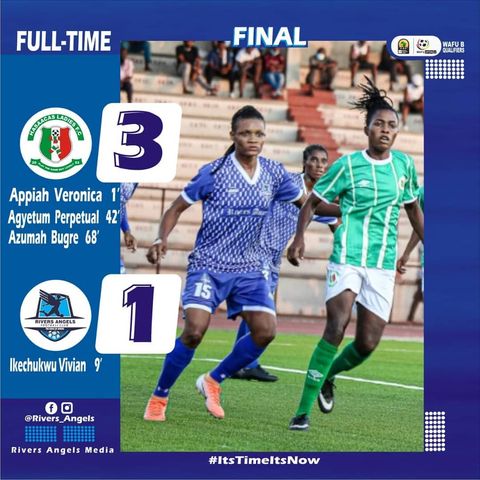 General Manager of Rivers Angels, Mrs. Matilda Otuene has opened up about her side’s unfortunate campaign ending, after the 2021 WAFU-B Qualifiers final defeat to Hasaacas Ladies in Abidjan, Cote d’Ivoire on Thursday, August 5.

The Nigerian champions had defeated Amis du Monde of Togo 5-1 to reach the final and also earn their qualification to the Caf Women’s Champions League in Egypt later this year but lost the zonal crown, crumbling 3-1 to their Ghanaian counterparts.

In the wake of the loss, Otuene apologised to the Rivers State government and Nigerians after failing to clinch the zonal title but has vowed the club will bounce back at the continental final in Egypt.

“When we were coming to Abidjan, we had two things at the back of our mind which is to first get one of the slots to Egypt and to win the trophy, we were able to achieve the first target and unfortunately we couldn’t win the trophy,” Otuene, who also doubles as the chairperson of the NWFL Club Owners, began.

“Though we are saddened not to have won the trophy, it’s a wake-up call for us to go back home and double our preparation for Egypt.

“It would have been a disaster if we didn’t get the slot to Egypt but since we have it now, I want to assure Nigerians that they will see a different Rivers Angels in Egypt.”

While appreciating the love, encouragement, and support the team received from the Rivers State government, fans of the club, Nigeria Football Federation, Nigeria Women Football League, and Football Stakeholders, she further promised the team will work harder to right their wrongs in Egypt.

“I want to thank our number one fan, our gender-friendly governor Nyesom Wike, our ever hardworking Sports Commissioner, Hon. Boma Iyaye, Permanent Secretary, Hon. Honour Sirawoo, Barrister Christopher Green, and all Rivers people for their continuous prayers and support,” she continued.

“Let me also thank Alhaji Babagana Kalli who represented NFF President, Mr. Amaju Pinnick and was with us in Abidjan all through, special thanks to Aisha Falode for all the calls and support, I will not fail to mention Dr. Mohammed Sanusi Nff general secretary, Alhaji Ibrahim Gusau, Chairman of state FA chairmen, Alhaji Ahmed Yusuf Fresh, chairman NFF Technical Committee.

“We are indeed grateful for the roles each and every one of you played in our stay in Abidjan, we believe that we will enjoy greater support from you all when we get to Egypt,” she concluded.

Players and officials of the Nigerian side, Rivers Angels are expected back in Lagos on Friday night and will later be in Port Harcourt on Saturday.