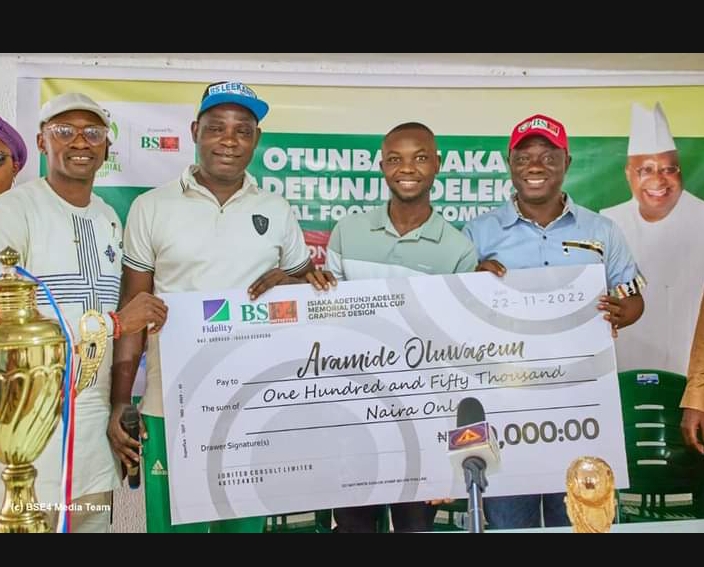 The winner of the Otunba Isiaka Adetunji Adeleke Memorial Cup Logo Contest, Opeyemi Fawumi on Tuesday in Ede was presented with a prize cheque of N150,000, by the initiator of the Competition, Rep Bamidele Salam.

Opeyemi Fawumi’s design was initially unveiled on Social Media on Sunday, but has now been shown off officially to the entire public at a Press Conference held at the Otunba Isiaka Adetunji Adeleke Hall, Country home, Ede.

Speaking at the event, the Initiator of the Football Tournament, Rep Bamidele Salam, member Representing Ede North, Ede South, Egbedore and Ejigbo Federal Constituency said the Competition will continue to thrive and get bigger each year. The innovative Politician said the Competition’s logo was rebranded because he wants it to get bigger and make it more appealing to the general public.

“We decided to rebrand our logo, by setting out a notice for a logo design contest, asking young, able designers to send in their entries. I was surprised someone sent a design from Sudan and that shows you how much this competition will grow in some few years time.

“Over two hundred and thirty-three entries came in and we were able to trim it down to seven and down to two, before finally announcing the winner.”

“We deeply appreciate the supports of the State Football Association, the Ministry of Sports in Osun, the Referees Association and the Media As a Whole.

“This Competition is going Statewide and we are bringing in quality assurance to the Competition, one of the reasons we decided to rebrand our logo.

“I am very excited and proud to have done something great for an important first-level event like the Otunba Isiaka Adetunji Adeleke Memorial Cup.

“The Organisers did a great job, by giving us the opportunity to participate and a platform to table our talents.

“Besides spending hours to build up my designs, I am glad I could come up with something special at the end of the day. This will spur me to want to do more.”

Also speaking, the Coordinator of the Competition, Oladele Bamiji tasked everyone involved in the Competition to put in double efforts to ensure a very successful competition at the end of the day.