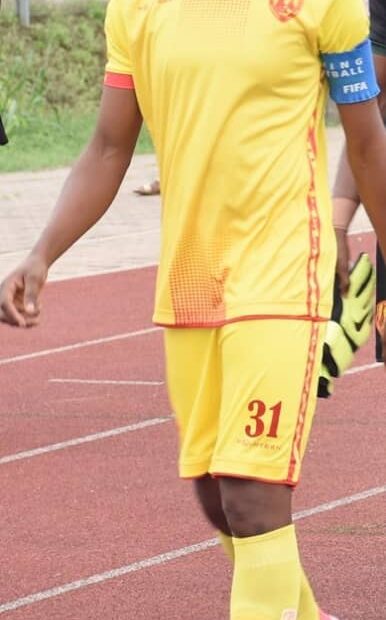 Super Falcons player and Captain of Edo Queens Glory Ogbonna could not hide her disappointment that her former team Ibom Angels could not retain her premiership slot in the recently concluded NWFL relegation playoff at the sports complex of the University of Benin.

A very unhappy Ogbonna barred her thoughts with tobexmedia.com ‘ Honestly I was not happy that my former team got relegated . I had predicted that the team would escape relegation ‘.

The Super Falcons player who had captained Ibom Angels for 6 consecutive years before switching over to Edo Queens is however optimistic that the team would bounce back to her previous premiership status.

‘My prediction was wrong in Benin but the team can still bounce back, it is very possible to achieve that.

Let’s watch and see, but I know they will bounce back she consoled herself in an optimistic manner. The Mobile and attack oriented defender who is popularly known as ‘ the General’ also spoke on the disappointing performance of her present team Edo Queens during the NWFL premiership Super 6 held in Ijebu Ode.

‘ I gave my best but it was not good enough to hand us victories in our matches but I was on top of my games there.It was a great level of experience for me, very competitive matches as all the teams wanted to qualify’.

She however agreed that Edo Queens missed the chance to represent Nigeria in the continent and would come back stronger for the next upcoming season.

Ogbonna scored the first goal against Equatorial Guinea as the Super Falcons had delightful performances enroute winning the Turkish women’s cup in Antalya earlier this year.