Quest for NPFL: Barnabas Daniel with a Brace for Gombe United 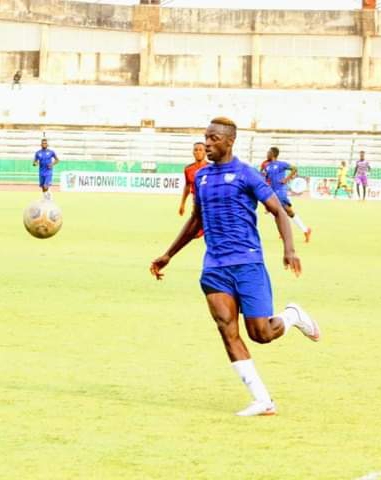 Gombe United continue its quest to return to the Nigeria Professional Football League with a big win against NAF of Abuja at the Pantami Stadium in Gombe.

After a goalless first half, Striker Barnabas Daniel got the curtain raiser in the 57th minute before rounding up the scoring in the 64th minutes for his 8th goal of the current campaign.

Speaking to www.tobexmedia.com the former Sunshine Stars of Akure striker who has been in a sensational form revealed that he still has more to offer off his sleeve after recording his 8th goal of the season.

“It has been a good season for me and I feel proud of our team’s performance against a very good side like NAF FC”.

“The victory was important and I’m glad we pocket another vital three points as we continue to fight for a place in the npfl next season, he concluded.