SESC Drums Support for Falcons ahead of Summer Series Tour 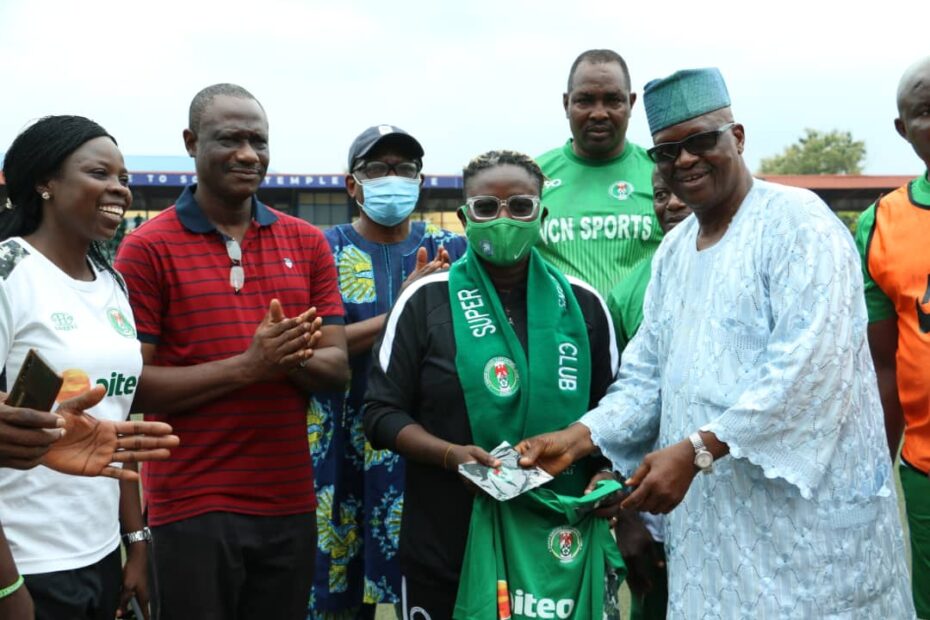 Ahead of the US Summer Series Tour, the Super Eagles Supporters Club has offered encouragement and support to help keep the winning spirit of the Super Falcons alive.

To show their solidarity and support, the President Prince Vincent Okumagba on behalf of the club decorated the Media Officer of the Super Falcons who also doubles as the Vice Chairman, Sports Writers Association of Nigeria (SWAN) Lagos Chapter Mrs Oluchi Tobe-Chukwu with a muffler, jersey and nose mask of SESC at the occasion of the VCN peace Cup which saw SESC tackling Lagos SWAN at the soccer temple Agege Stadium.

Prince Okumagba hailed the Falcons winning mentality and contributions towards women football in Africa and beyond.

“We are proud to be associated with The Super Falcons and the winning spirit that has pushed them into becoming trailblazers for women’s football in Africa and global football.

Be rest assured of our total support when the Falcons travel to the US”.

Meanwhile, Mrs Tobe-Chukwu popularly known as tobex, thanked the Super Eagles Supporters Club for their support which has been in existence before she became media officer.

” I’m really overwhelmed with this great support from SESC, which has always been there right from time

With this kind of support, the Super Falcons will continue to strive to bring glory to the Country and the Continent”.

The Super Falcons will begin the 2021 WNT Summer series invitational tournament against Jamaica at BBVA Stadium in Houston on 10 June, followed by a meeting with Portugal three days later at the same venue.