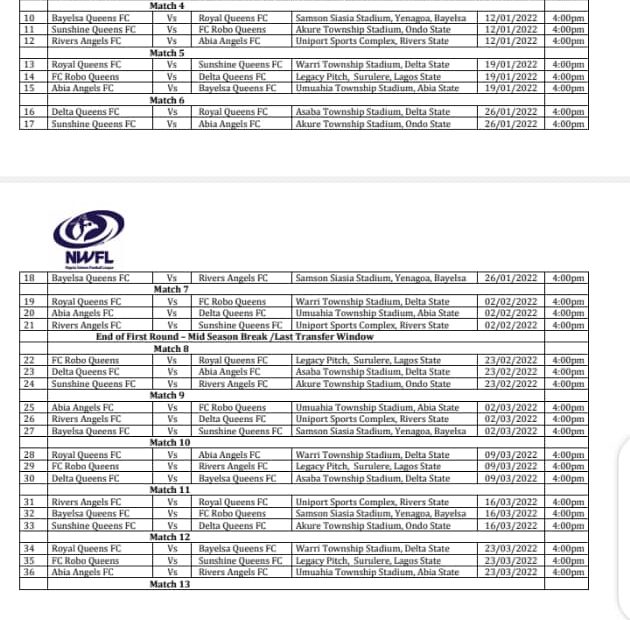 The Nigeria Women Football League with ten days to the kick-off of the 2021/22 NWFL Premiership season has released the comprehensive league fixtures of the matches that will be played in the new season in both the Group A and B, that has been slated to start on Saturday, December 8, 2021 at the Stephen Keshi Stadium, Asaba and other two venues in Lagos and Akure. While in Group A, the season opener actions will be in Lokoja, Abuja and Patani.

The Week One matches will see Delta Queens host defending champions, Rivers Angels in Asaba, while FC Robo host Abia Angels at the Legacy Pitch, Lagos and Sunshine Queens host Bayelsa Queens at the Akure Township Stadium in Group B. While in Group A, Confluence Queens FC will tackle Pelican Stars, at the Confluence Stadium, Lokoja, and Premiership league debutant, Naija Ratels FC slug it out with Osun Babes FC at the Old Parade Ground, Area 10, Abuja. In Gombe state, at the Patani stadium, Adamawa Queens will host Edo Queens FC.

The characteristics of the NWFL Premiership season opener in Group B as designed by the NWFL Secretariat would see, the league defending Champions, Rivers Angels, the 2019/2022 winners, and the second, and third placed clubs at the Super Six in Ijebu Ode all play in the season’s opener.

A total of 42 matches will be played in each of the two groups, in the 14 Weeks Abridged League season. Each of the clubs will play twelve games. And kick off of all matches pegged at 4pm.

The mid-season break and Open Window for Transfer have been fixed to start from February 2, 2022 at the end of Week 7 and season resumes and close of Transfer Window on February 23, 2022 in Week 8.

The NWFL Abridged league season ends on April 6, 2022 to go into the Super Six where the top three clubs in each of the two groups will converge in a designated venue that would be opened to all the clubs to indicate interest to host, to decide the season’s champion and Nigeria’s representative to the WAFU B Qualifiers for the second edition of the CAF Women’s Champions League.