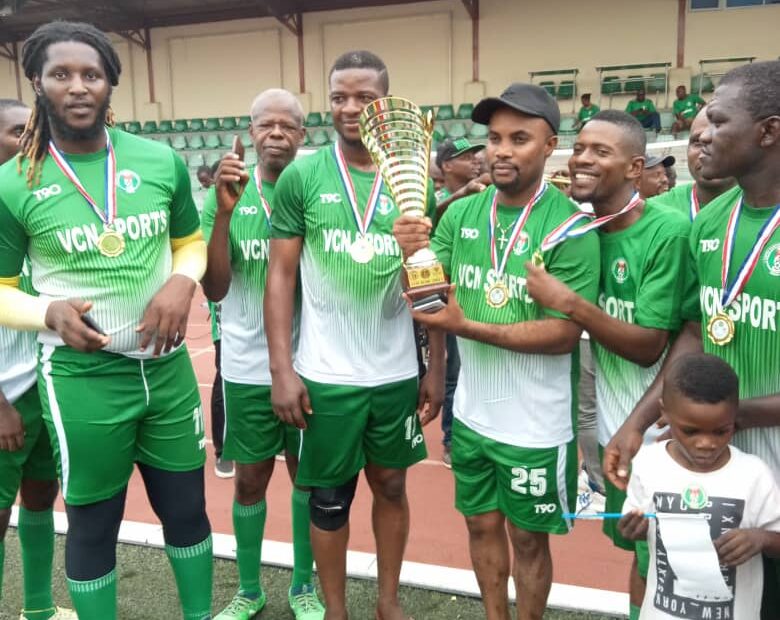 A spirited Super Eagles Supporters Club (SESC) defeated Lagos Swan by a goal to nil in their first ever outing on the pitch in a novelty game on Saturday as they look set to face popular WhatsApp group Nigerian Sports Mouthpiece in a yet to be announced date.

Rotimi’s curling freekick in the second half, flew above everyone in the crowded box to beat Shina Oludare who attempted to catch the ball but instead drops into the bottom left corner of the post as the SESC secured their first win of the season.

Immediately after the game, fans, players and guests were entertained by SESC Instrumentalists with melodious tune to celebrate the win over the Sports Writers.

President of the Club, Prince Vincent Okumagba who spoke from his base in Canada, thanked the members of the club, Lagos State Chapter of SWAN, and VCN Sports for making this a reality even as he hinted this will be a regular exercise to foster unity between the Press and Supporters Club.

“Indeed, it was a success. I watched the game online, both teams were fantastic on the day.

Beyond Football, we want to use this as a tool to foster love and unity between the gentlemen of the press and the supporters club.

I want to use this opportunity, to thank everyone who played a major role in ensuring this event becomes a reality. Lagos SWAN, my Excos, Members of the club, VCN Sports amongst others.”

Meanwhile, Chapter Chairman Vancouver, BC, Canada Elijah Onosemuode in solidarity and support to the club, made a cash donation of 100,000 (One Hundred Thousand Naira) to celebrate SESC win over Lagos SWAN.

The SESC however confirmed the that they had received the invitation to play NSM FC in a yet to confirm date and are sure of extending their unbeaten run when both sides meet.

“This is to confirm that the Super Eagles Supporters Club has accepted the friendly invite of Nigeria foremost WhatsApp platform, Nigeria Sports Mouthpiece (NSM)”.

“Still basking in the euphoria of her first win against Lagos State Sports Writers Association of Nigeria (SWAN), President of the Club, Prince Vincent Okumagba will set up a committee to ensure the goal is achieved”.

“SESC will hope to extend it’s unbeaten run when they tackle NSM in Lagos” The statement read.