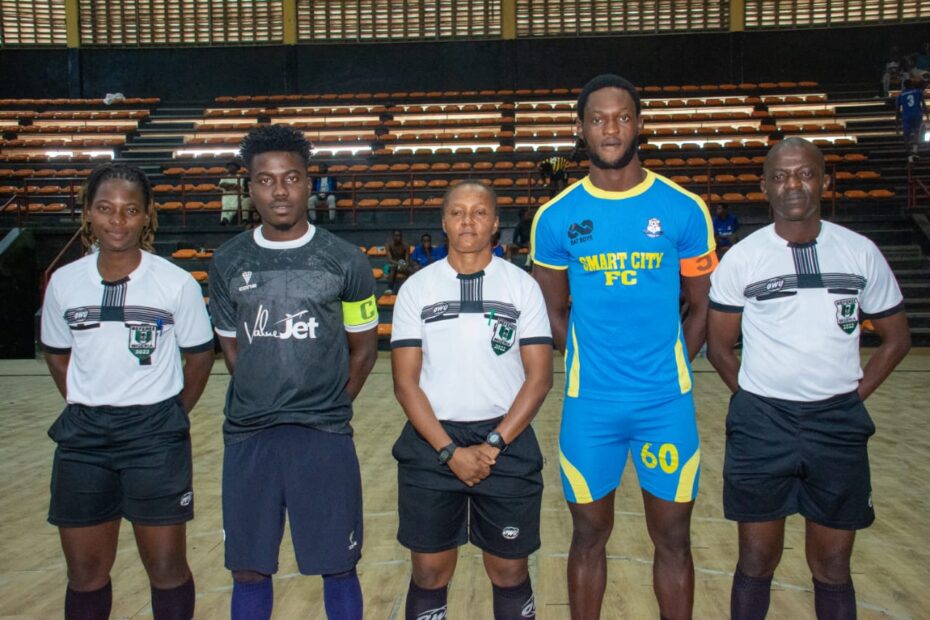 FUTSAL Lagos League To Kick Off In January 2023.

Exhibition matches charting the history of FUTSAL in Lagos and Nigeria as a whole was centre staged in a packed NIS Gymnasium at the National Stadium Surulere Lagos on Saturday the 31st of December 2022.

The Futsal Lagos Exhibition Games traces the journey of the indoor round leather game as it is expected to open doors to the first ever FUTSAL League competition in the country.

Speaking during the event in Lagos, the Executive Director of Futsal Lagos and Managing Partner WLB Sports Limited, the Company set to run the professional league, Unwana Etuk, said he feels their expectations are already being met and the exhibition game will give FUTSAL more exposure.

“Our expectations are already being met and there is an array of talents being displayed here today. From the look of things, we would be able to harness these talents and even discover much more talents, when the league starts.

“For us, the next step is the upcoming league, which is really why we are here. We want a league where players can play FUTSAL professionally, make money, thereby earning a living from it.

“Verily, after that, we would be hoping to provide the right structure that would ensure the growth of the FUTSAL League. I am very sure we can get good players that would compete well, representing Nigeria at the global Stage. “

Also giving his thoughts, the Co-Founder and Chief Operating Officer of FUTSAL Lagos, Bolaji Animashaun, noted that there is need to bridge the gap for young players that want to go professional.

“FUTSAL Lagos was bourne out of the need for inclusion in football. There is indeed the need to bridge the gap for young players that want to go professional, but never got the chance to do that, and no doubt, this is a viable option for them to realize their dreams.

Kidsports FC defeated Sportellectual FC by 5-2 in the first exhibition game on Saturday, Smart City FC and Kingspor FC, played out a 3-3 draw in the second game, while Team Founder beat Team Celebrity by 6-4.

The FUTSAL Lagos League is going to be run and managed by WLB Sports Limited and will kickstart in January 2023 with ten teams.