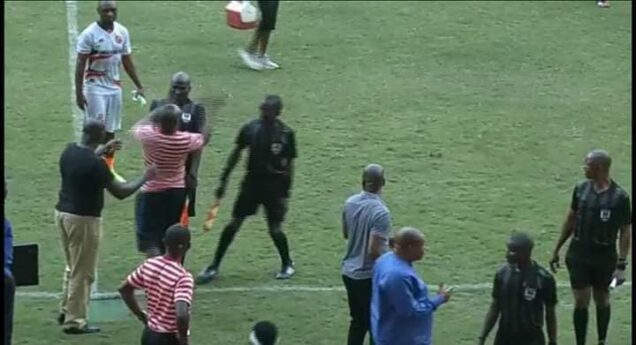 After conclusion of preliminary investigation on the assault on an Assistant Referee, the League Management Company (LMC) has announced the immediate expulsion of Sunday Etefia, the Dakkada FC Assistant Coach.

The LMC also fined Dakkada FC a total sum of N3.5m and ordered to play their next three home matches at the Samuel Ogbemudia Stadium in Benin for breach of Rules B13.52 and C9 following the incidents of the MatchDay 4 fixture.

The LMC also recommended a review of the performance of the match Officials including the Match Commissioner, Dr. Mrs. N Anyanwu for her failure to duly report the incident of assault on the Assistant Referee 11. It noted that ” curiously, the Match Commissioner identified the perpetrator as a fan whereas it was a club official”

Also recommended for a performance review is the Match Referee, Mathew Tanimu from Plateau State for his match Management and failure to timely submit the match report given the serious incident.

Etefia was indicted for assaulting Assistant Referee 11, Sani Baba, at the end of the Matchday 4 fixture against Remo Stars in Uyo. The LMC recommended to the Nigeria Football Federation (NFF) to review the coaching licence of Etefia “as you have failed the threshold to be a coach under the NFF Licence”

In the Summary Jurisdiction notice, the LMC noted that Dakkada FC was charged for “breach of Rule B13.52 in that on Sunday, the 2nd of January 2022, you did not fulfill your responsibility, as the designated home team, to ensure adequate and effective security for persons involved in the match, wherein a match official (AR 2 – Sani Baba) was assaulted and battered by one of your officials (Sunday Etefia) as the match officials proceeded to leave the pitch at full time; and the General Manager of the visiting team was also harassed and assaulted in the tunnel at half time”.

In the second charge, Dakkada FC was found in breach of Rule C9 for failing to control their officials and ensure their proper conduct at all times. The battering of Assistant Referee, Baba by Etefia and harassment of Remo Stars General Manager were cited as such improper conduct.

Consequently, the LMC fined the Club N3m for failure to provide adequate security in the course of the match.

Dakkada were ordered to pay the sum of N250,000 each to the Assistant Referee and General Manager of Remo Stars for medical expenses and may include any additional verifiable and authenticated medical costs.

While ordering Dakkada to play a minimum of three home matches at the Samuel Ogbemudia Stadium, Benin City, the LMC ruled that the club would only be permitted to return to its home stadium upon receipt of a satisfactory report or update on the formal report to the Police and prosecution of the official involved in the alleged assault. The prosecution must be authenticated by the LMC legal team and compliance unit.

The club must pay the stipulated fines within seven working days and have a two points deduction which shall be suspended for a probationary period of the remainder of the season.

Both the club and the charged official have 48 hours from the date of the notice to submit to the summary jurisdiction or elect to face a disciplinary hearing.