NWFL Most Consistent Goal Machine , Gift Monday lays Claim to Super Falcons’ invitation ; Unthinkable for Her to be Absent in Falcons – Joe Amene 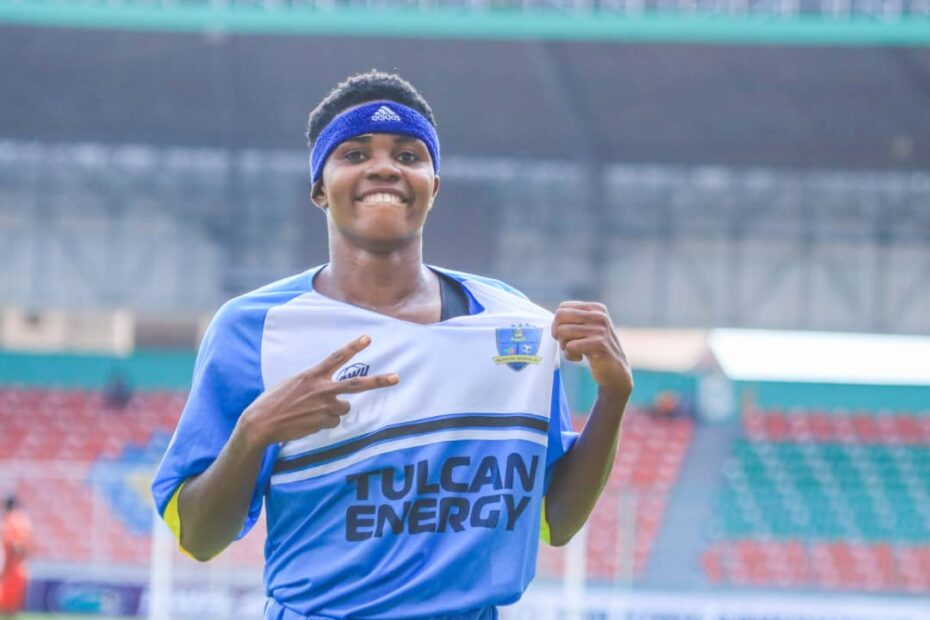 FC Robo loanee to Bayelsa Queens, Monday Gift, Thursday scored another two goals against Edo Queens of Benin in the ongoing NWFL Premiership Super Six Competition sponsored by Tulcan Energy Resources, to take her goal tally in the 2021/2022 Super Six to six goals in three matches and a total nine goals in the season to move to the top of the goals’ scorer chart, to put her in a vantage a position to emerge yet again the Highest Goal Scorer in the NWFL Premiership League.

Monday Gift scored one goal against Rivers Angels, scored the Competition first hat trick against Naija Ratels of Abuja and went on to score two goals against Edo Queens in the Bayelsa Queens 2-1 victory against the Edo team.

The FC Robo on loan player, scored the all the six goals in the Super Six with relative ease and professionalism.

A board member of the Nigeria Women Football League, and General Co-ordinator of the NWFL Nationwide League, Mr. Joe Amene, said after the heroics of Monday Gift against Edo Queens, at the Samuel Ogbemudia Stadium Lagos, that it is unfanthomable not to see Monday Gift as one of the league players invited to the Super Falcons camp for the Women Nations Cup in Morocco.

Amene, added that, it’s unacceptable to declared Monday Gift surplus to requirement. I wonder where the national team selectors are looking at to ignore a star player in Monday Gift, who by all grades, is better than some of the players who are getting all the prominence in the national senior team.

“Monday Gift is the only Nigeria Women Football League player who is in top form and merits the Falcons first team invitation.

“At the last edition of Aisha Buhari Cup in Lagos, last year, Gift Monday was one of the two home players that scored the two goals recorded scored by Nigeria. After the Super Six, the player was went on loan to the Rivers Angels of Port Harcourt to rescue the team to the CAF Women Champions League. Soon after this, the player played at the Betsy Obaseki Women’s Football Challenge, in Benin City, where she scored 9 out of the total 12 goals scored by her team, FC Robo of Lagos.”

Joe Amene noted that, the Super Falcons should quickly have a rethink and invite Monday Gift to the AWCON camp.”