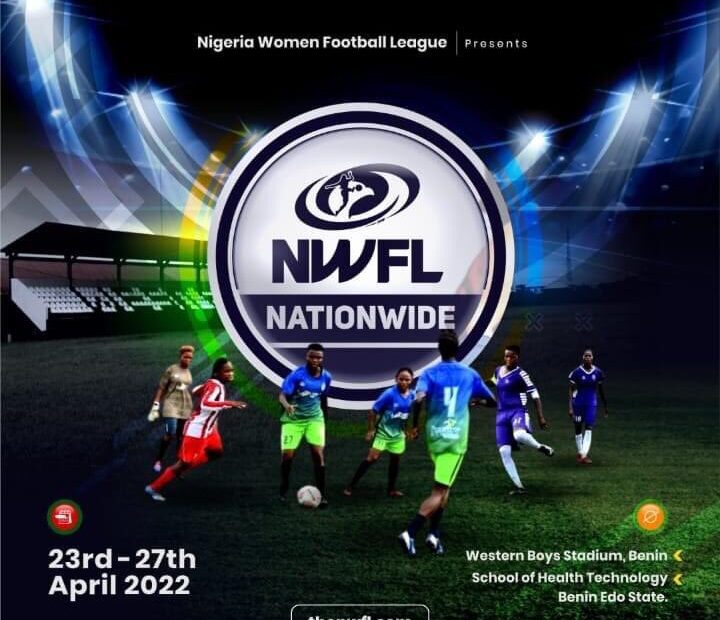 Starting from Saturday, April 23, 2022, It would be complete fireworks in Benin City, as 16 NWFL Nationwide clubs across Nigeria will launch battle in the third tier of the Women’s Football League, the amateur class, for the promotion tickets to the NWFL Championship League.

The battle will be for the two available promotion tickets to play in the NWFL Championship, the professional class of the women’s league.

The General Coordinator of the NWFL Nationwide, Sir Joe Amene, has stated that: “The NWFL is going to be very meticulous in our choice of officiating referees for the league in the drive to ensure the best teams gain promotion to the NWFL Championship.”

The 2021/2022 NWFL Nationwide will kick-off on April 23 with 16 clubs that have been divided into four groups of four teams each.

In Group A 1, we have Lakeside Queens FC, Abruka Queens FC, Celestial Queens FC and Ijebu United Queens.
Group A 2, has Papa Soccer Academy, Ekiti Queens FC, Delta Babes FC and Society Teen Girls FC.
The group A1 and A2 teams will play all their group matches at the Western Boys Stadium, Benin.

The Group B1 has Unification Queens FC, Imo Strikers Fc, Brave Hearts Queens and Ubalaka Queens.
The Group B2 has P. Kassim Eletu Queens, FC Niger Amazons, Fortress Queens FC and Castmog FA.
All the B1 and B2 team will play their matches at the School of Health Technology, Benin.

Each of the teams will play three games made up of two home and one away matches. The matches in all the four groups will be played simultaneously according to the fixtures from April 23rd to 25th, 2022, to avoid any accord match so as to get true winners.

The top clubs in each of the four groups will qualify for the Final Stage of the Nationwide League on April 27.
The winner of Group A1, will play winner of A2, while Winner Group B 1 will slug it out against Winner Group B2. At venues to be decided by the NWFL Secretariat.

The winners of these two matches, Match 25 and Match 26, to be played simultaneously on April 27, at different venues, will be promoted to the 2022/2023 NWFL Championship, the professional cadre of the Nigeria Women Football League, a step below the NWFL Premiership.

The NWFL Nationwide will start with a technical meeting on April 22, while matches proper start on April 23 and end on April 27, 2022.