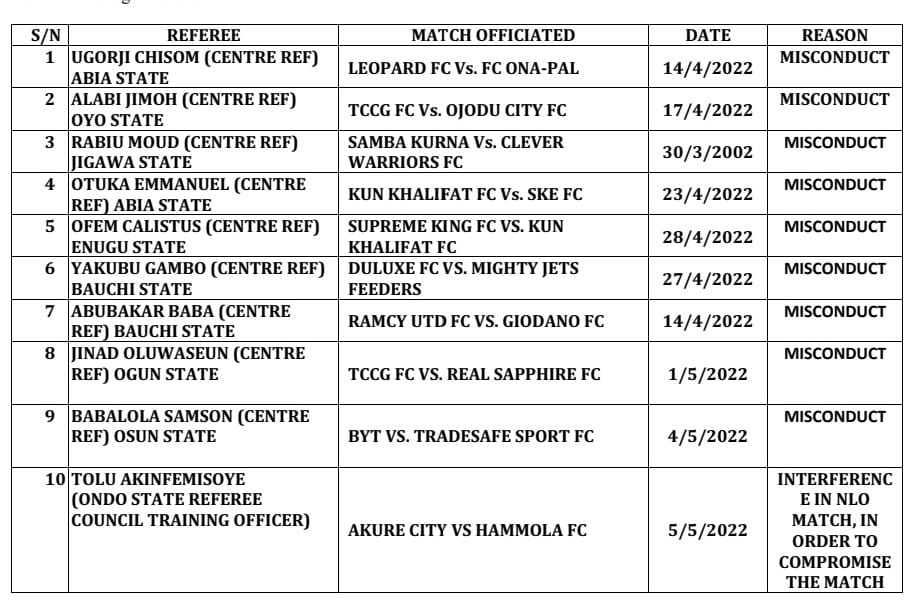 Going by it’s zero tolerance policy regarding biased officiating in the league, the Board of the Nationwide League One (NLO) has directed its Secretariat to report some Referees found breaching the ethics of the game to Nigeria Football
Federation Referees Department for investigation.

Recall in April, NLO began the compilation of a list of match officials to be scrutinized and sanctioned, owing to allegations made by some clubs that some referees had thrown professionalism to the mud by aiding and abetting some few teams to get results.

Chief Operating Officer (COO), Olushola Ogunnowo who frowned at such action, did say that the Secretariat of the nation’s third-tier domestic league would continue to monitor match officials, protect and ensure the integrity of the outcomes of the games.

In taking the angry bull by its horns, nine (9) referees who officiated during the first round of the ongoing NLO 2022 Division One season and a Training Officer are to face the long arm of the law.

Top on the list is Tolu Akinfemisoye, Ondo State Referee Council Training Officer who on 5th of May interfered in the game between Akure City and Hammola FC with a view of compromising the game in favour of the home team.

Ugorgi Chisom and Otuka Emmanuel both Center Refs from Abia State were found to have performed below the par in Leopard FC vs FC Ona-Pal and Kun Khalifat vs SKE FC matches.

Ofem Cletus from Enugu State was not speared as he was found to have been biased in the game between Supreme King and Kun Khalifat.

Finally, the quartet of Rabiu Moud (Jigawa State), Alabi Jimoh (Oyo State), Jinad Oluwaseun (Ogun State) and Babalola Samson (Osun State) all Refs were found to have misconducted themselves in these matches.

However, the NLO Secretariat has hereby reiterated that clubs should always submit their matches video recording for review.