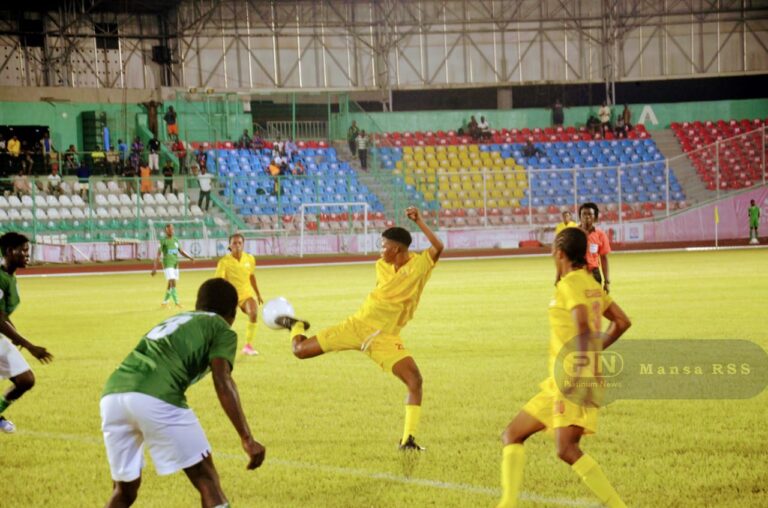 Yetunde Fajobi Edo Queens Football Club of Benin yesterday night scored the first hattrick of the Second edition of the Betsy Obaseki Women’s Football Tournament, in the 9-0 mauling of Royaltoms FC of Lagos by Edo Queens FC, in the opening ceremony of the biggest women pre-season soccer tournament in Nigeria, played at the Samuel Ogbemudia Stadium, Benin City.

Edo Queens opened scoring with the goal scored by Eunice Godwin. The second goal was scored by newly signed Joy Jerry from Bayelsa Queens and third by Emem Essien to end the first half at 3-0.

The Edo Queens team playing under their new coach, Moses Aduku, who replaced former coach, Wemimo Matthew, showed a lot of character from the first minute of the game letting the spectators at the stadium which included the Edo State First Lady, Mrs. Betsy Obaseki, the Deputy Governor, Rt. Hon. Philip Shaibu and his wife, Maryann Philip Shaibu, that they were out for business.

With this 9-0 victory over Royaltoms FC of Lagos, Edo Queens top the Group B table with three points and +9 goal difference.

In the Day 2 games at the University of Benin, Ugbowo campus and Western Bus High School Ikpoba Hill,
Nasarawa Amazons of Lafia will battle against FC Robo at Uniben, 10am, in a very tough fixtures, Naija Ratels of Abuja confronts Fortress Ladies of Benin at Uniben at 1pm.

At the Western Boys High School, Delta Queens of Asaba will try Heartland Queens of Owerri for size at 10am, while Edo Queens of Benin will attempt to consolidate on their wonderful start in the competition when they face fellow NWFL Premiership club, Royal Queens of Warri at 1pm at the Western Boys.