CSP Shamang Receives FC Gintra’s Star Damilola Koku In Lagos, As She Lit Up The Nigeria Police Games In Uyo As Torchbearer 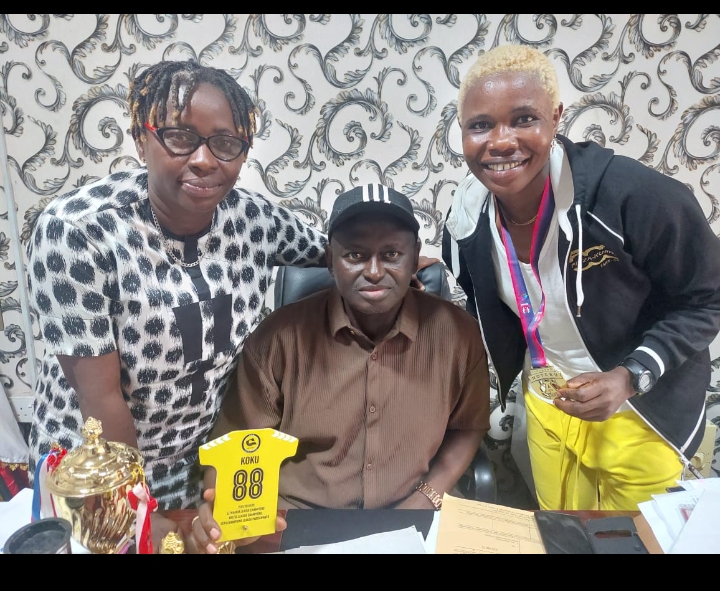 FC Gintra’s Forward, Damilola Koku was given the privilege to serve as torch bearer at the 13th Nigerian Police Games, which kick-started In Uyo on Wednesday.

The Former Rivers Angels Forward scored sixteen goals in all, to help her Lithuanian Based side FC Gintra’s win the Spark Energy Women’s League for the 14th time and was expectedly received alongside the Media Officer Of The Super Falcons, Oluchi Tobex Tobe-Chukwu in Lagos, last week by the Nigerian Police Force Sports Secretary CSP Kalat Shamang, who simply described her as a shining star in the Nigerian Police Force.

The Police game has over the years produced Sports Icons who have made the nation proud at global events and one of them is Damilola Koku, who joined the Nigerian Police Force in 2016and has since then risen to the post of the CPL.

A very proud moment for Koku, who had the rare privilege of carrying the Police Games torch infront of the President of the Federal Republic of Nigeria, Muhammadu Buhari, who was well represented by the Minister of Police affairs, Muhammad Dingyadi, the Governor of Akwa-Ibom State, His Excellency Emmanuel Udom and the Inspector General of Police, Mr. Usman Alkali Baaba amongst other important dignitaries.

The lighting of the Police Games is traditionally an honour given to someone who symbolises the core values of the organization, including good character, uprightness and commitment.

“It was a feel-good moment for me, a proud moment and a moment I will never forget in my entire life, ” Koku told the media.

“Its an humbling experience for me and everyone involved. I graciously thank the Planning Committee of the 13th Police Games for allowing me participate as torchbearer in this event.” She concluded.

The Police Games is one of the biggest Sporting Events in Nigeria and is currently holding in Uyo, the Capital of Akwa-Ibom State.