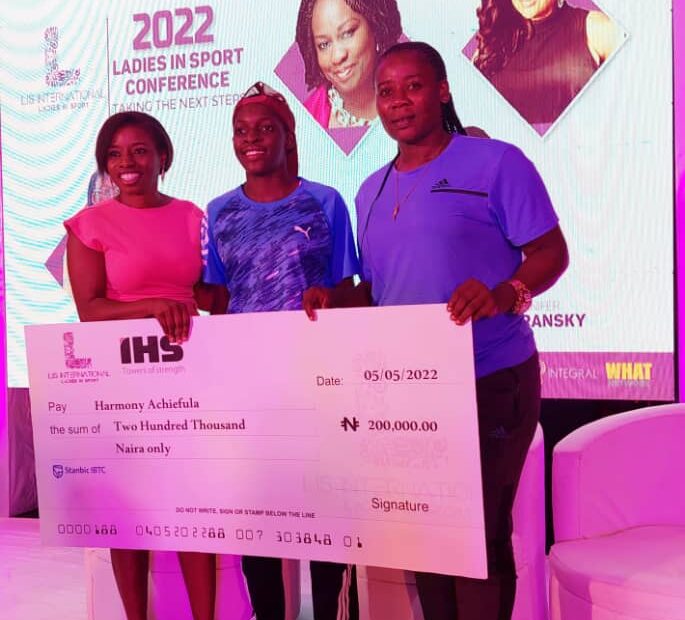 ,Achiefula, who emerged the Highest Goal Scorer and Most Valuable Player at the just concluded NWFL Nationwide League in Benin City, Edo State, after scoring 10 out of total 15 goals scored by her team, Imo Strikers of Owerri.

Achiefula got a cash of N200,000 as grants from the LIS, among three young women athletes and a football team, Alimosho Ladies at the 2022 edition.

Others who got the grants aside Harmony Achiefula include Stella Ayankele, currently, the best home-based 100m hurdler and reigning Nigeria University Games (NUGA) champion, Temitope Adesina, the reigning National Sports Festival champion in high jump, and Alimosho Football Club, that will be Nigeria’s sole representative at the Neymar Cup that will be taking place in Qatar later this year.

The Imo Strikers sensation, was oficially presented to Nigerians at the NWFL Premiership League Super Six official press conference, official draws and unveiling of the sponsors for the Super Six, Tulcan Energy Resources, at the Lagos Marriot Hotel, Ikeja, by the Chairperson of the NWFL, Aisha Falode.

According to Falode, Harmony, will be a special guest of the NWFL, at the Super Six in Benin City, Edo State, from May 16, where she will be presented with a Commemorative plague as the Goal Queen at the NWFL Nationwide 2021/2022.