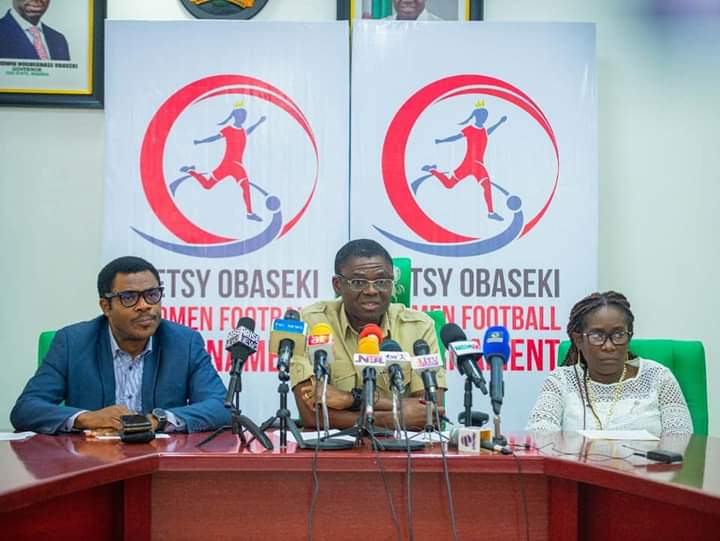 Vice Chairman, Board of Trustees, Betsy Obaseki Women Football Tournament, Rt Hon Comrade Philip Shaibu has disclosed that 12 teams, two from the grassroots and ten from the top leagues will be participating in this year’s edition.

Addressing the media in his office in Benin, the board Vice Chairman appreciated the key stakeholders who have contributed to the modest success so far achieved, stating that the theme for this year’s tournament is built around the girl child.

We are using this tournament to create public awareness for the danger inherent in drug abuse and trafficking.”

The Vice Chairman who is also the Edo State Deputy Governor said:
“This year’s event will be having all the 36 states’ first ladies in attendance at the final, by the grace of God. The implication of that is that women’s football has come to stay in Nigeria.

Kudos to the head of the women’s football league, Ms Aisha Falode and our First Lady, Mrs Betsey Obaseki for encouraging Women’s Football.

We also want to thank the Sports Commission for having the tournament as part of their annual sports calendar.

We took another step towards institutionalizing this event and the implication is that it won’t be an abandoned tournament like others of the past.

Our partnerships with the women’s league would be sustained as there’s a plan for them to put it in their program so that at the end of every league season, they have a tournament that will usher in the next league.

We are creating this platform for the girl-child to thrive and that’s why we have pay parity in our men and women teams. We are happy that the results are now manifesting in their performance. Our girls are now more confident in themselves than ever before, they make us proud and they no longer see themselves as second fiddle in society. What the boys can do, they can also do better – just as they have done us proud at the just concluded Commonwealth Games, in Birmingham.