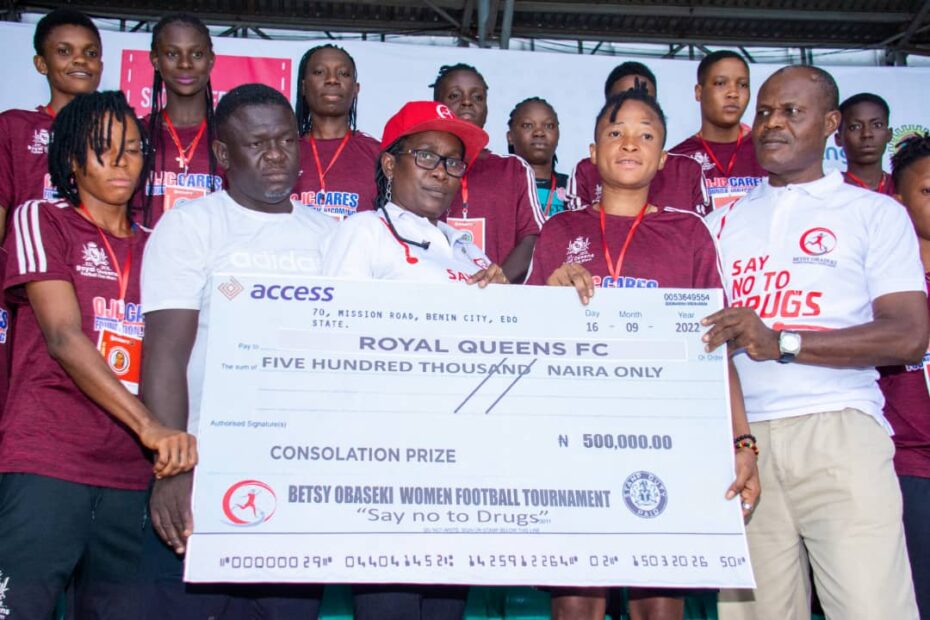 Four Quarter-finalist who crashed out of the 2022 Edition of the Betsy Obaseki Women Football Tournament on monday have been handed their Participation fee of Five Hundred Thousand Naira each, by the Organisers of the Yearly Women’s competition.

The presentation of Dummy Cheques and Cash to the four teams was done at the Samuel Ogbemudia Stadium by the Permanent Secretary Edo State Sports Commission, Sabina Amiemenoghena Chikere and Dr. Kweku Tandoh.

Permanent Secretary, Edo State Sports Commission, Mrs Sabina Amiemenoghena Chikere hailed the teams for the spirit of sportsmanship they possessed during the competition and encouraged them to take the positives from the competition ahead of the new NWFL Premiership Season.

“I want to commend your efforts and task you all not to relent, but take the positives from here and use it to improve on yourselves and the team.

Head Coach Of Confluence Queens, Liadi Bashiru was full of praises for the Organisers of the Betsy Obaseki Women Football Tournament. The experienced gaffer said the competition is a win-win for them as a team.

“The Betsy Obaseki Women Football Tournament is win-win situation for us and for every team that participated in it. For us, it was a very good test ground for us and the loss gave us an in-depth on the strength and weakness of our team. We learnt alot and we would get better.

“This competition is highly rated and I must commend the Organisers for a job well done. We look forward to participating and doing much more better next year.

Naija Ratels FC Captain Josephine Dzer said the tournament created an opportunity for them to prepare harder for the new season and focus for the challenges ahead.

The Semi-Final matches of the 2022 Betsy Obaseki Women Football Tournament will be played on Wednesday, while the final match will take place on Friday at the Samuel Ogbemudia Stadium, Benin.