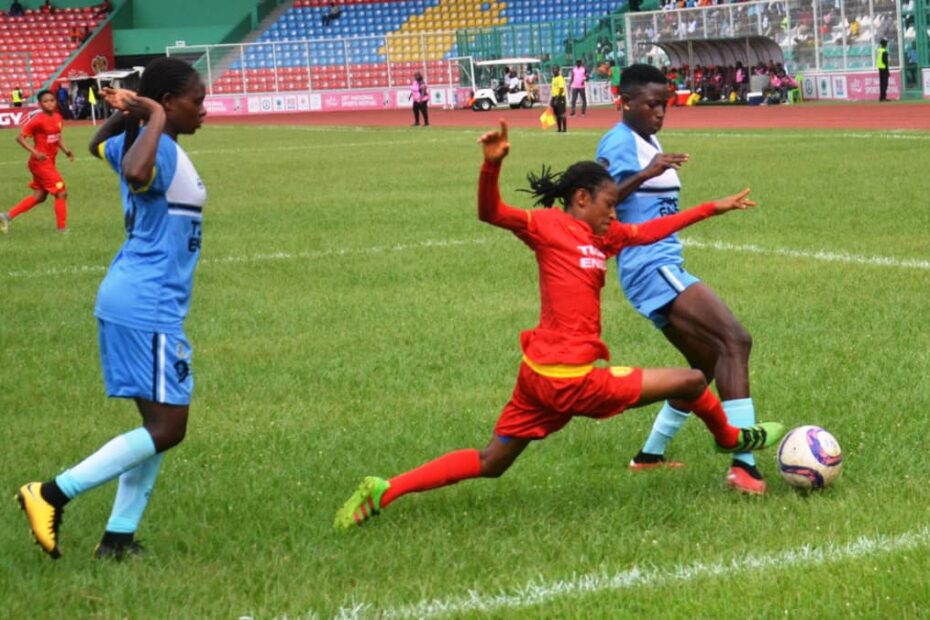 A rejuvenated Edo Queens in the last battle of the day three of the Nigeria Women Football League super six gave a good account of themselves, but their efforts at the electrifying Samuel Ogbemudia Stadium were not enough to stop high flying Bayelsa Queens who outscored Edo Queens to clinch their third win of the tournament.

Monday Gift scored twice in ten minutes to put the Restoration Girls in control of the game. A 47th-minute effort from Monday Gift who managed a chip in amidst three red shirts gave her team the lead and dampen the morale of Edo Queens who were all over Bayelsa Queens in the first half.

Edo Queens surged ahead to get an equalizer, but miscommunication in the middle of the pack saw Bayelsa Queens gain possession and countered the Obaseki Girls. In her usual element, Monday Gift was well placed with a wall splitting pass that found its a way through unmarked space – the hot goal poacher wasted no time to send into the net her second for the day, a sixth of the tournament to further dampen the spirit of Edo Queens in front of their fans.

Unbothered, Edo Queens restarted the game and was presented with a couple of chances that could have resulted in at least three goals, but Bayelsa Queens’ Cameroonian goalkeeper, denied the girls the scoring chances.

Midfield dynamo, Esther Oyenezide found space on the far left corner of her attack, cut into her right and released a shot – too hot for Bawou Ange – masterclass from Esther Oyenezide and rebooting goal for Edo Queens it was meant to be.

Edo Queens for the rest of the game pushed in for an equalizer, but Bawou put up a woman of the match contesting performance to deny Edo Queens on several occasions as the game ended.

Bayelsa Queens now have 9 points from three games as well as Monday Gift with six goals in three games – a draw for the ‘Restoration Girls’ will make them champions of the 2021/2022 NWFL Premiership season.