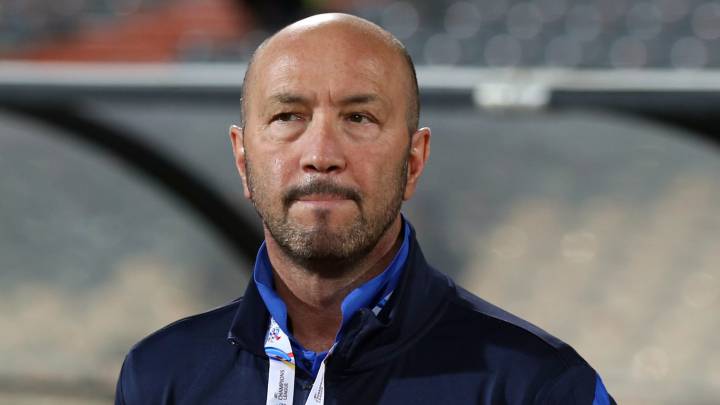 Former Italian National team goalkeeper and Manager at Cagliari, Walter Zenga has announced his intention to Coach the Super Eagles of Nigeria, and has submitted his application to the Secretariat of the Nigeria Football Federation.

According to his agent, Alberto “Jimmy” Fontana, the Coach who was born on 28 April 1960 last managed Serie A club Cagliari. He was a long-time goalkeeper for Inter Milan and the Italian National team

His first managerial job was as Player-Manager of New England Revolution.
He had a short stint with Milanese Serie D team Brera Calcio, before moving to Romania in 2002, where he managed Naţional București and then Steaua București where he won the domestic title and reached the Round of 16 of the 2004–05 UEFA Cup after eliminating UEFA Cup winners Valencia from the competition.

In the summer of 2005, Zenga joined Red Star Belgrade, leading the Serbo-Montenegrin team to a double (National League and National cup).

In the summer of 2006, Zenga was appointed as the coach of Turkish Süper Lig side Gaziantepspor; he resigned in January 2007 in order to accept an offer from United Arab Emirates club Al-Ain.

Other teams he handled included Catania in April 2008, he saved them from relegation to Serie B and Palermo in 2009.

On 11 May 2010, he was announced new head coach of Saudi Professional League club Al-Nassr and later moved to Al Nasr SC in 2011 in the UAE Pro-League.

When he returned to Italy in 2015, Zenga was appointed head coach at Serie A side Sampdoria for the 2015–16 season. In 2016, he was at Wolverhampton Wanderers.

On 8 December 2017, Zenga was appointed Crotone manager and took over in Cagliari in March 2020.

During his playing career, Zenga was part of the Italian squad that finished fourth at the 1984 Olympics in Los Angeles and was the starting goalkeeper for the Italian team that finished third in the 1990 FIFA World Cup tournament held in Italy, keeping a World Cup record unbeaten streak. A three-time winner of the IFFHS World’s Best Goalkeeper Award, Zenga is regarded as one of the best goalkeepers of all time.