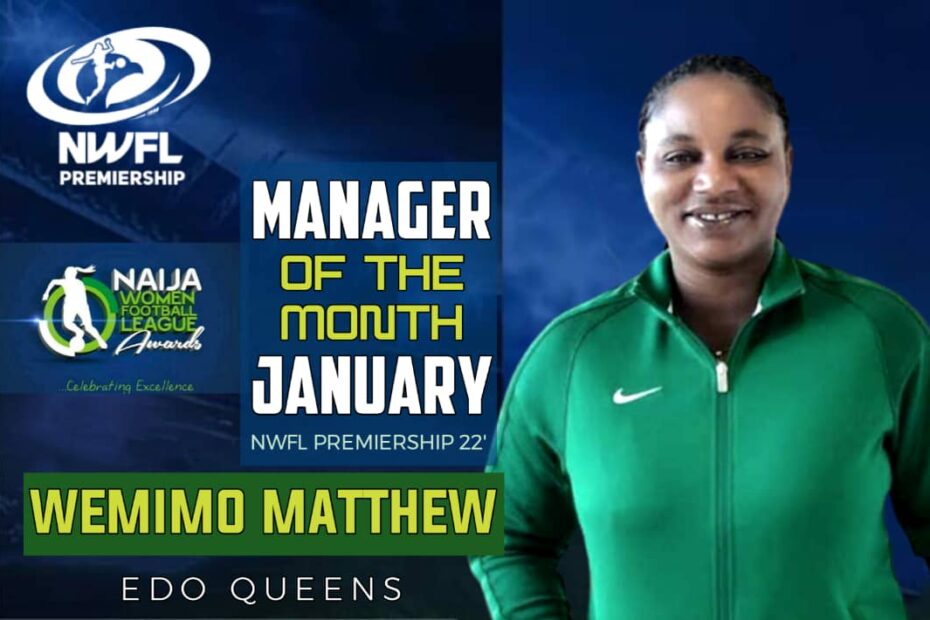 Nasarawa Amazons Attacking Midfielder, Tarnum Dooshima has waltzed off with the NWFL Premiership Player of the month of January.

The diminutive dazzler scooped the monthly prestigious Award on the back of a superlative month for the ‘Solid Babes’ having made a decisive impact on her team’s bid for the NWFL Premiership Super 6 Championship.

The former Adamawa Queens player has proven to be a key cog in Christopher Danjuma’s team and thus clearly deserves the accolades, with her team staying on top of the Group A Log after week 7.

Tarnum netted three goals in three matches played in January. A double against Adamawa Queens and an important away goal against Naija Ratels in Abuja.

In the Manager’s category, Edo Queens Head Coach, Wemimo Mathew got the awards, ahead of Nasarawa Amazon’s Christopher Danjuma, who won two games in three, Moses Aduku of Bayelsa Queens and Edwin Okon of Rivers Angels.

The ‘Obaseki Ladies’ won Nasarawa Amazons 2-1 on Matchday 4, traveled far south on Matchday 5 to beat Pelican Stars 1-0 at the U.J Usuene Stadium, Calabar and rounded up January with a 4-0 defeat of Osun Babes FC at the Samuel Ogbemudia Stadium, Benin.

The awards will be presented to the Winners on Matchday 8 & 9 in Ilorin and Benin respectively.