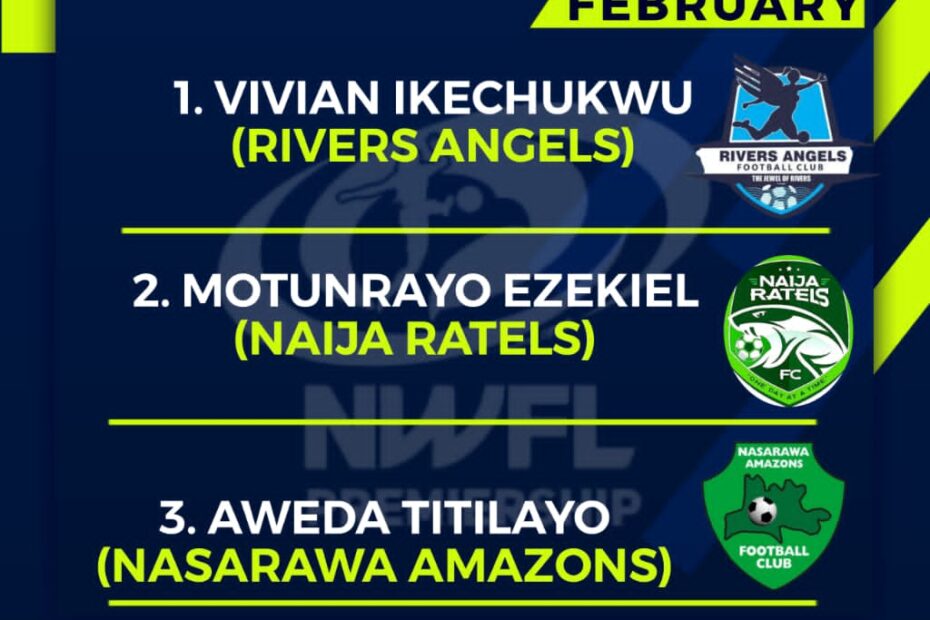 Rivers Angels defeated Sunshine Queens home and away in February, with the Super Falcons forward scoring in both occasion.

She scored the winning goal in Porthacourt at the 63rd minute and recorded her goal in Akure in the 83rd minute.

Motunrayo Ezekiel deservedly got nominated for February Player of the month, after a superlative performance in the game against Pelican Stars. The young utility player scored a hat-trick in their 3-0 bashing of Pelican Stars at the Area 10 Sports Complex, Abuja.

Aweda Titilayo scored twice against her former side, Confluence Queens at the Lafia City Stadium, on Matchday 7, to earn a nomination for the February player of the month award. The attacking midfielder scored in the 33rd and 68th minute to give her side a comfortable 2-0 win.

In the Manager’s category, Osahon Emmanuel of FC Robo Queens, Daniel Evunema of Delta Queens and Edwin Okon of Rivers Angels all got nominated for the prestigious awards. .

Osahon won two out of two in February, winning Royal Queens 1-0 in Warri and 3-1 at the Dipo Dina Stadium, Ijebu-Ode on Matchday 8.

Edwin Okon’s side also won Sunshine Queens home and away in February. The Jewel of Rivers defeated the ‘Betty Babes’ 2-1 and 2-0 in Porthacourt and Akure respectively.

Daniel Evunema’s side played out a goalless draw against Abia Angels in Umuahia and went on to beat them 2-0 in Asaba.

The Naija Women Football League Player and Manager of the Month winners was selected by a combination of votes from a panel of Women Football experts and jurists.

The winners will be announced on Wednesday, the 16th of March 2022.