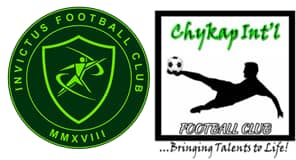 Chykap Football Club has partnered with Invictus Sports Services Center in the UAE.
Invictus is a Sports Services agency that have a robust players development programme which focuses on players growing their talents , developing their skills to get them to full potential. When this is achieved such players are prepared for trials in different clubs where Invictus partners.
Invictus are into partnership with clubs in Portugal, United States of America and Austria.

Tobexmedia.com caught up with the Chairman of Chykap International Football Club Philip Chilaka recently in Lagos.
” This arrangement will help us to maximise the potentials of our players through the various placements abroad.
I am very delighted with the MOU signed because it will open more doors for players who have great potential but do not have the wherewithal to succeed internationally.
Some of these players will return someday to represent Nigeria “.

Chilaka was also quick to state that Invictus also owns a football club in the United Arab Emirates where these players are trained , prepared for greater challenges before moving them abroad.

On when the memorandum of Understanding would be activated
” The MOU has been activated on the 1st of May 2022. The first set of players will leave the shore this country by the first week of June comprising 5 players. We are almost through with their paper works”. He explained excitedly.

Chykap International Football Club based in Lagos is a non league side totally focused in marketing players abroad in an enabling environment, Philip Chilaka explained to tobexmedia.com.

On why Chykap took such a deliberate and purposeful step.
” Our long term aspiration is to continue to grow our base as regards the number of players outside Nigeria in International clubs.
We would continue to ensure that players who do not have the opportunity in Nigeria because of the bureaucracy in our league system get International opportunities and grow in a very honest and professional environment”.

Chykap International Football Club in the past moved several players outside Nigeria which includes Ibrahim Gbadamosi who is in his second season in the Uzbekistan Premiership and Tayo Saliu Junior in the Swedish second division.