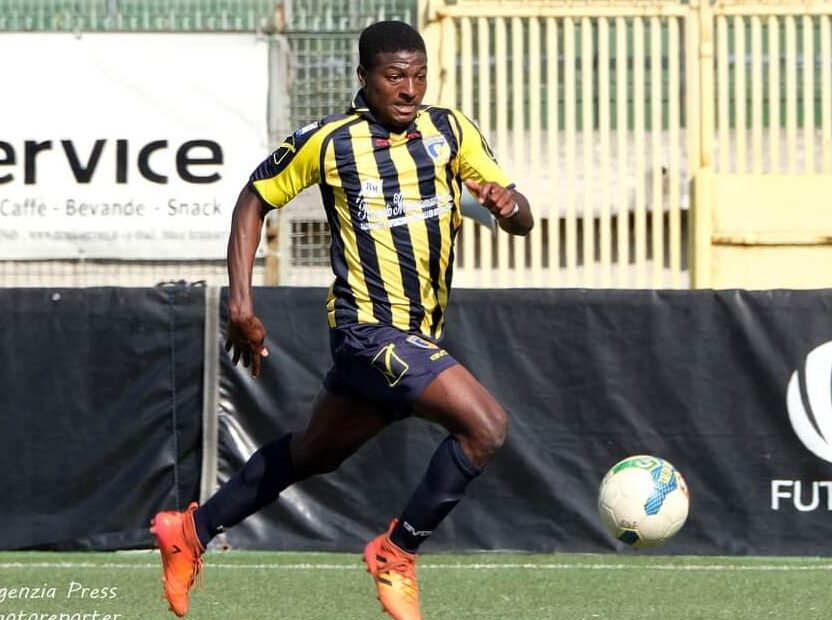 Oyewale Sulaiman in the colours of Giugliano Calcio of Italy is a delight to watch week in week out ,there is no doubt that the Nigerian player is a definition of modern day defender, reports www.totorinews.com.

Oyewale, a very energetic left full back can also function as a wing- back depending on the tactical formation of his coach and he has performed tremendously well to the admiration of the management of the club and fans.

Naturally gifted with great speed that makes it easy for him overlap freely, while orchestrating the attack of his team from the left wing, he has been able to contribute to the fortunes of Giugliano, as the team continues to make progress to gain promotion to Seria B in the Italian league.

He was a class act in the game against  Avelino away when he came as a replacement for Lorenzo D’ Alessio in the 24th munute, where he able to thwart the attacking forays of Avelino attackers from the left side and the tide quickly changed in the favour of his team as the game progressed.

The rare gem of a defender was very resolute helping his teammates to frustrate all the attempts of Avellino to equalise after Giugliano went ahead in the 68th through Gioielli Esposito.

It was a game hard fought and victory well deserved for Giugliano, which took the team to the 20points from 13 games and I a modest 5th position in their quest to gain promotion.

In a brief chat with the media, Oyewale said that he and his teammates will continue to work hard, adding that promotion is still  possible and winning at away against Avellino was very encouraging.

“We were glad to win Avellino. It was a very difficult game, but we worked very hard, cover for one another to secure the valuable away maximum points.

“If we continue to get favourable results in our league games, then I strongly think that promotion is very possible. Personally, I want to continue to work hard so as to be I the plans of the coach in every game,” he said.

It appears that it will be another weekend of maximum points for Giugliano when the welcome Monopoli in the match day 14 fixture at home.