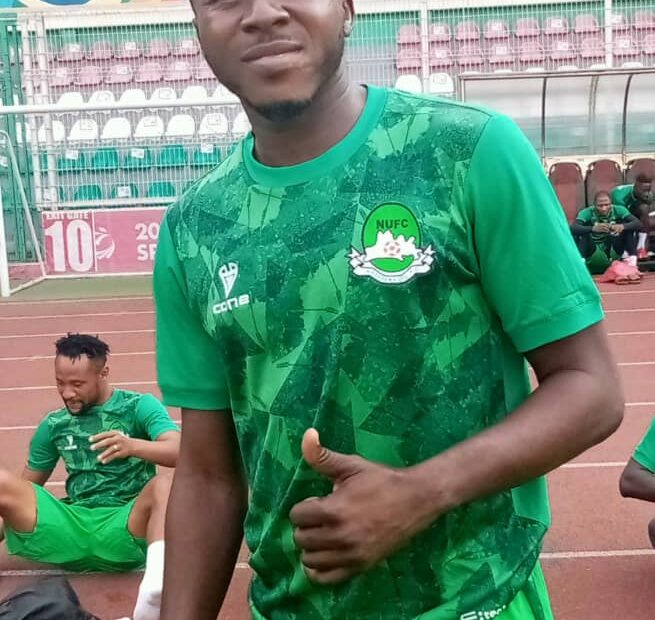 Former Nigeria junior international and sensational winger, King Osanga, has come out to say his team, Nasarawa United FC, are in the right frame of mind as they prepare to tackle Dakkada FC in the 2021/22 Nigeria Professional Football League matchday five tie on Sunday.

King stated this on Saturday evening, immediately after the Solid Miners’ training session at the Samuel Ogbemudia Stadium, Benin City, Edo State, a temporary home ground for Dakkada FC who were banished to the venue by the League Management Company, LMC, following assaults on match officials during their week four clash against Remo Stars in Uyo, Akwa-Ibom State.

“We left home with the full expectations of getting the maximum points off our hosts, but should it not go that way, we won’t return home empty-handed, either.

“We just finished our last training session before the match on Sunday. As you can see, everybody is psyched up for the game”, the former U-17 FIFA World Cup-winning player said.

In his earlier address, Chairman of the Club, Chief Barr. Isaac Danladi, charged the players to go all out to snatch the available points, adding that the odds favoured them.

“Gentlemen, the Samuel Ogbemudia Stadium is not a strange terrain, having played the final of the 2021 Aiteo Federation Cup here against Bayelsa United.

“Hopefully, the ugly result we got here won’t repeat itself.

“We will play tomorrow and we shall win by the special grace of God.

“The venue is a neutral ground both for Dakkada and us, but let’s take it as our home ground and utilize every opportunity that comes our way as the odds favour us.

“If we are able to get the valuable points, going back home for our next game will be easy, and that will improve our standing on the log”, he stated with optimism.

United have won two of their last three meetings with Dakkada, with a draw, since the Uyo-based side got promoted to the elite league in Nigeria.

During the 2019/20 Season, Nasarawa United won 3-0 in Uyo with a brace from Anas Yusuf(now with Wikki Tourists FC) and Ibrahim Matthew, while a brace from Ikenna Offor and a strike from Silas Nwankwo gave the Solid Miners similar result in Lafia, and a goalless draw in Uyo during the 2020/21 Season.

Coach Bala Nikyu has the full compliments of his players following the return of defenders, Paul Odeh and Victor Collins, from their red card suspensions.

The Dakkada versus Nasarawa United match comes up by 4pm.