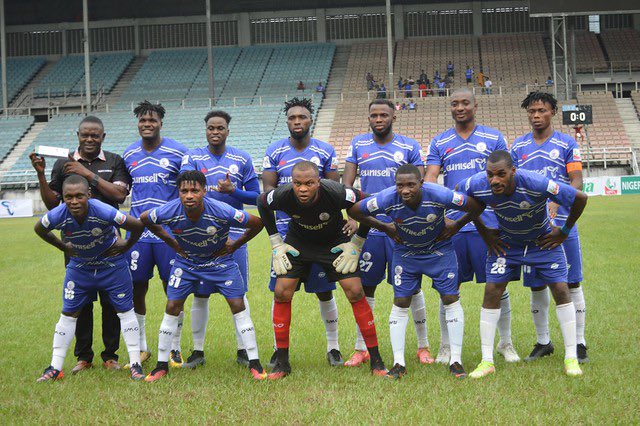 The top two teams on the 2021/2022 Nigeria Professional Football League (NPFL) table Rivers United and Plateau United suffered defeat on the same day for the first time this season as MatchDay 24 reached an enthralling climax on Thursday.

With seventeen goals scored in five matches on Wednesday, fifteen more were scored in the other five decided on Thursday to account for thirty-two (32) goals, the highest scored on a single MatchDay this season.

Quite poignantly though, the least scoring games in the MatchDay involved the two top scoring sides in the league who were running neck-on-neck in the race to the title. Both teams conceded first half goals in their away ties and never recovered.

At the Ondo State Sports Complex in Akure, Sunshine Stars made it a sweet return back home from Ijebu-Ode where they had sojourned and made hay while the sun shine, beating Rivers United 1-0 courtesy of Ugochukwu Leonard Aputazie’s 5th minute strike. The defeat ended Rivers United’s 12-match unbeaten run and marked only their second loss this season.

The only positive for Rivers United would be that their four-point cushion over Plateau United still subsists after the Jos based side went down 0-1 at basement team Heartland FC. Homeboy Chukwudi Nwaodu scored the game’s only goal in the 16th minute to render Fidelis Ilechukwu’s return to the Dan Anyiam Stadium fruitless.

While the win moved Heartland off the bottom for the first time in the second stanza of the season, MFM FC dropped to 20th after a shock 0-2 loss at home to Wikki Tourists in Lagos.

Abubakar Aliyu’s 2nd minute goal and Salomon Chigoziem’s effort three minutes to the end all but put paid to their survival hopes.

Another team dropping to depths unimagined is Kano Pillars who were hammered 4-0 by Enyimba in Aba. Striker Victor Mbaoma netted a brace to get to ten league goals this term before substitutes Emeka Obioma and Godwin Emmanuel added their names to the score sheet. To add insult to injury, Pillars who have now dropped to 19th on the log had their goalkeeper Joshua Enaholo sent off in stoppage time.

The day’s highest scoring game came at the Nest of Champions where reigning champions Akwa United dismantled Nasarawa United 6-1. The Promise Keepers led 4-0 at half time courtesy of goals from Ubong Friday, Adam Yakubu and Wisdom Fernando (2). Babatunde Bello and Franklin Matib added two more in the second half, after King Osanga had pulled one back for the visitors.