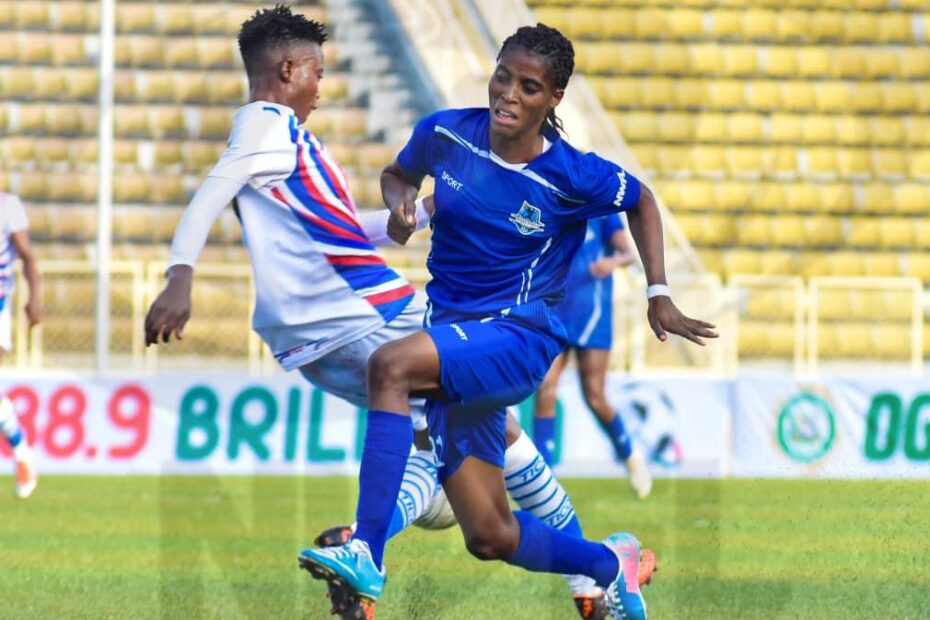 We move into week 12 of the NWFL Premiership with alot of expectations. Edo Queens are still the only team with almost 100% record and will face a difficult task as they travel to Lafia to face Nasarawa Amazons. Rivers Angels are still in disbelief over their 3-1 home loss in the hands of strugglers Royal Queens. Naija Ratels and Delta Queens are on bye this week and will resume action nextweek. The game between FC Robo Queens and Sunshine Queens has been postponed to Friday, over the untimely passing away of ‘Betty Babes’ Legend Elizabeth ‘Janded’ Johnson.

The Angels from the East’ will welcome defending Champions Rivers Angels to the Umuahia Township Stadium, the pressure is really on the both sides as they lock horns on Wednesday evening.

Abia Angels are presently 6th on the log with 7 points and are followed in the bottom by Sunshine Queens, who has just 4 points in 9 games.

For Abia Angels, a win against Rivers Angels, will further strengthen their chances of remaining in fold against relegation and for Rivers Angels, after a very disappointing outing last week, would love to consolidate and get something positive in Umuahia.

Royal Queens midfielder Tosin Ogundeko stole the show last week Wednesday scoring her second brace of the season against League giant, Rivers Angels in Porthacourt. On Wednesday, Bayelsa Queens are going to face a resurgent Canadian Geese’ on Wednesday, and this the ‘Gloryland Girls are aware of and seem to be well prepared to face. Royal Queens are in fifth position with 10 points, while Bayelsa Queens are presently in second position with 18 points, just one point behind Rivers Angels.

Nasarawa Amazons aim in this game would be to kill two birds with a stone. win and close up the gap between them and the ‘Obaseki Ladies’ and also to put a stop to their opponent’s unbeaten run.

The clash could be a tensed one with the home team more under pressure to perform Infront of their fans. Edo Queens are quicker upfront but Nasarawa Amazon’s have shown class so far this season, especially in Lafia, where they score goals at ease. Edo Queens are more fired up not to lose a game this term, and it clearly shows that this game could produce plenty of goals. This game is perhaps the biggest game of the week.

Confluence Queens Manager Liadi Bashiru will ensure his side doesn’t slip, like that did in their last home game against Osun Babes.

Adamawa Queens had a very poor result at home last week, losing 3-2 to visiting Naija Ratels and Coach Jacob Vandi would put all his arsenals in place to get a favourable result in Lokoja.

The Super 6 race is hoting up in Group A and a win for the New Direction’ Ladies will see them going above Naija Ratels on the log.

This game will be played on friday. An Important game for both teams. FC Robo Queens need an outright win at home to topple Delta Queens in third position and pray Bayelsa Queens doesn’t pick a point in Warri so they can move to second position. At the other hand, Sunshine Queens also needs to win to gather momentum and seek redemption against relegation. They trail Abia Angels with three points.

Pelican Stars are bottom in Group A and have only won just a game so far this season. The ‘Ayade’ Ladies will face Osun Babes FC who are still basking in their 1-0 home victory over Osun Babes FC. For Pelican Stars, it is a must win game for them and they will seemingly out their all to record another victory in front of their home fans.

The Omoluabi Queens’ have always gotten a favourable result in Calabar and they seem confident they will continue the streak on Wednesday.