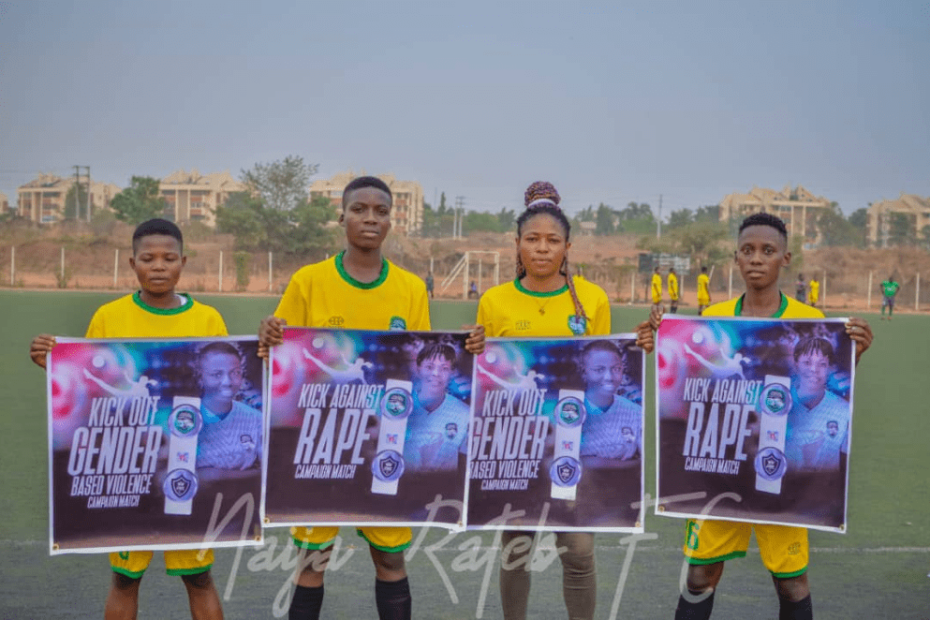 Naija Ratels president Offers Scholarship To Over 40 players, Says Football is a Tackler of gender based Violence

Football as a sport is an important tool to bring people together and also educate boys about true masculinity, violence prevention and the rights of women. That’s why NWFL Championship side, Naija Ratels Football Club took out time to play a novelty match against a team assembled by it’s President, Barrister Paul Edeh on the 6th of February 2021 at the Area 3 Football pitch, Abuja.

A minute of silence was held before the start of the match in memory of victims of Gender-based violence across the world.

The game which featured some notable individuals was filled with fun and excitement, as both teams united to end violence against women. The Naija Ratels Ladies scored first through Adanna Nwachukwu before Kenny Jubril equalised late on for the Barrister Paul Edeh side to make it 1-1.

“Sports is a vital tool for building peace and understanding across nations and can also be a powerful instrument to oppose violence against the girl child, helping promote gender equality and also children’s right”, said Naija Ratels President, Barrister Paul Edeh.

“I passionately believe in the power of sport. The values that I have as a man, leader, husband and father must be used to help women who are being abused and to focus our attention on preventing abuse from happening by educating boys about true masculinity, violence prevention and rights of women.

The United Nations SDG Peace Ambassador further stated that he will be offering scholarships to all his players to the University level, noting that those who failed WAEC and NECO will retake it, while UTME forms will be brought for those with required credits.

“So today, I came together with my friends to be able to highlight a very topical theme which has to do with Gender based violence, we have come here to say no to gender-based violence, that the girl child need to be given opportunity to express themselves in a society that belongs to them as well.

“When we forayed into the game of football, investing in the game of football, we decided we aren’t going to do it business as usual, we knew the education of these children was very key, hence we decided to give all of them scholarships and help them realise their dreams, also we diversified into farming and other business to keep funding these girls who have left their homes to come play for Naija Ratels. Their welfare is well catered for and that’s very important for us.” He concluded.

A lawyer and human rights activist, Barrister Nicholas Elechi lauded the initiative and tasked the Federal Government, NFF and other notable Stakeholders to give more support to Bar. Paul Edeh in the project.

“We are marking an end to violence against women in the society with this event. It’s amazing what Barrister Paul Edeh is doing. A single individual doing what so many Nigerians cannot do. He has given scholarships to over forty girls which will enable them to get the best of education. It’s really amazing

“He is a very good example of what it means to be a great Nigerian. Wilson Churchill once said: ‘ If every Englishman can defend his family, the whole of England will be defended.”

“I urge the Nigerian Government, NFF and other key stakeholders to support him in this course. I am really impressed.”

Also, Ex-International and Chairman of Kogi United and Confluence Queens, Abdul Sule, who was one of the participants, thanked the convener, Barrister Paul Edeh for giving support and recognition to the girlchild, noting that he will always be available for anything that has to do with Gender-based violence.