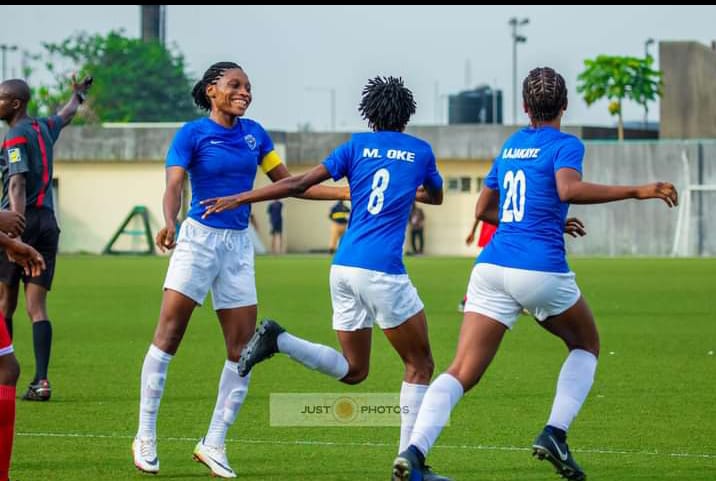 FC Robo’ aim to bounce back from the narrow defeat suffered against Sunshine Queens in Akure last week was punctured by Delta Queens as both teams shared the spoils with a goaless draw.

The Delta State team who is being handled by Former Super Falcons and Falconets coach Daniel Evumena came into Lagos determined to continue their streak of not losing any match so far in the team.
The Delegation comprised of the Chairman of the Delta State Sports Commission Mr Tony Okowa , Solomon Ogba , the president of The Aquatic federation Mrs Ihedioma and football loving fans from Delta State.

Despite looking the better side on the pitch, ‘The Lagos Landladies’ were unable to convert any of their chances.

The visitors also threatened on some occasions and really looked impressive in the presence of their State Sport Commissioner Tony Okowa but the Robo defense were quite up to task.

The match was characterised with complaints from both sides as regards officiating .The game ended in a barren draw.

The coach of Fc Robo Osahon Erobosa who was smarting from a defeat against Sunshine Queens the previous week in a not too happy tone told tobexmedia.com
” You can’t win every game in football, that’s the case today. The girls played really well but it wasn’t meant to be.
Now, our attention has been shifted to the next game.”

FC Robo Queens has played 5 matches with 7 points and occupies the third position in Group B.