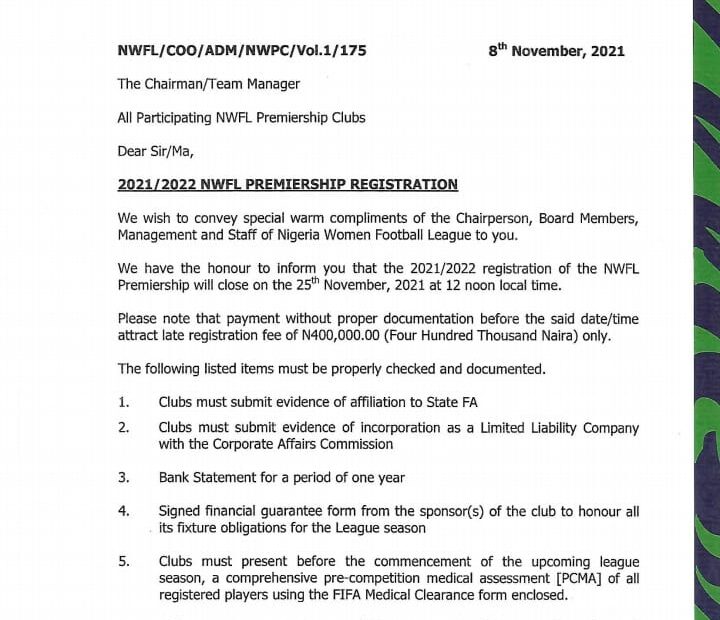 In a statement signed by the Chief Operating Officer of the NWFL, Modupe Shabi, the league body advised the Premiership clubs to ensure they perfect all registration processes before the closing date which has been fixed November 25, 2021 ahead of the NWFL Premiership League kick off on December 8, as there won’t be any postponement of kick off date.

The statement noted that, late registration will attract a penalty fee of N400,000.

Modupe Shabi noted that: “At 12noon local time on November 25, 2021, all NWFL Premiership clubs must have submitted evidence of incorporation as a Limited Liability Company with the Corporate Affairs Commission, bank statement for a period of one year, signed financial guarantee form from the sponsor(s) of the club to honour all it’s fixtures obligations the league season.

“Clubs must also present before the commencement of the season, a comprehensive Pre-Competition Medical Assessment (PCMA) of all registered players using the FIFA Medical Clearance Form enclosed.

“The clubs must present Seasonal Insurance Certificates of registered players for the upcoming league season which will cover for accident, injury and death (Dekaizen Worldwide Limited Insurance Company). Adding that clubs must present at point of submission of licensing materials, list of officials and their designations. Original and duplicate copy of players contract, duly stamped by the NWFL before disbursement to the various parties. A list of Coaching Crew with details of their qualifications, attaching credentials of which minimum requirement / certification – NIS Advance Course of Coaching Study.” Noting that: “Uncertified NIS or equivalent coach will not be eligible / qualified to sit on the technical bench during matches in the upcoming league season.

“Clubs must submit to the NWFL Secretariat team preferred match venues for all home league matches. Match venues must have standard facilities e.g dressing rooms for players and officials, stewards / security officials numbers must be in tandem as stated in the pre-match meetings. Team home and away jerseys must be specific.”

The statement also touched on players welfare, which states that: “Clubs must submit to the NWFL an audited Annual Report of their activities as follows:
(a). Indebtedness, profits or losses.
(b). Sponsorships.
(c). A clear evidence of payment of players salaries in the previous season.”
The statement advised the clubs to take note and ensure compliance before the November 25 deadline for registration, as there won’t be half measures.