SULEIMAN SHAIBU : The Goal Keeper trainer with a Rich pedigree 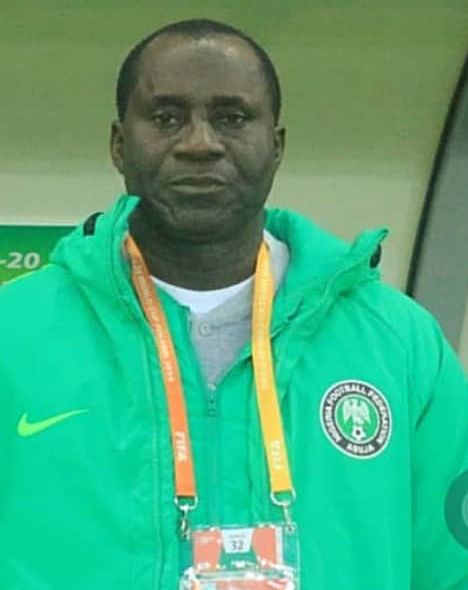 Shaibu who was recently appointed as the second assistant goalkeeper coach with the U.23 National team and the home based Super Eagles team, is not new in the National teams nor Nigeria football. He still hold the record of the oldest goalkeeper that had ever played in the Nigeria League. He kept for various clubs from 1981 to 2007.

Young Suleiman Shaibu started his journey as a goalkeeper with a non League club in Kano Fagge Pele Football Club of Kano in 1981. He spent only one season in the club before he was scouted by the handlers of Raccah Rovers of Kano, where he played until 1986, before the then city rivals Wreca FC signed him. In 1987 he went to the then Nasco jets before returning to Bank of North FC of Kano until 1991 when he teamed up with ITF of Jos. He played only one season with the Training Fund team before Dantata United came for his signatures in 1994.

Katsina United was his next stop in 1995. Wikki Tourists came calling in 1996, a club he played with till 2003 when he moved over to Jigawa Golden stars and retired as a Coach player in 2007. Same year he was honoured by the Nigeria Professional League as the oldest goalkeeper that played in the league.

Goalkeeper Suleiman Shaibu who was born on 1 July 1967, won various honors with teams he played for. He was a member of the Kano state Academical team that won Gold, Silver and Bronze medals at the Manuwa Adebanjo cup in 1985, 1984, and 1983 respectively. He was a member of the all the conquering National U.20 team (Flying Eagles)that won the African Youth Championship in 1985. He helped in promoting Katsina United in 1995, Wikki Tourists in 1997, and Jigawa Golden stars in 2007. He also have several medals from the Federation cup for the clubs he kept for.

After 27 years between the sticks in the league, Suleiman Shaibu who hails from Kwara state, but born and bred in Kano state, attended the National Institute For Sports in 2005, where he obtained the Basic Certificate in Football Coaching, he is CAF C and B licensed coach. He has also attended the FIFA MA goalkeeping course among others.

No doubt, with the coming of Suleiman Shaibu to the senior cadre of the national team, the dreams of having great goalkeepers for the senior national National team may now be a reality.