Women Football : Damilola Koku’ four goals , A goal from Ikechukwu Vivian was the motivation For FC Gintra in the Bashing of Sk Nova 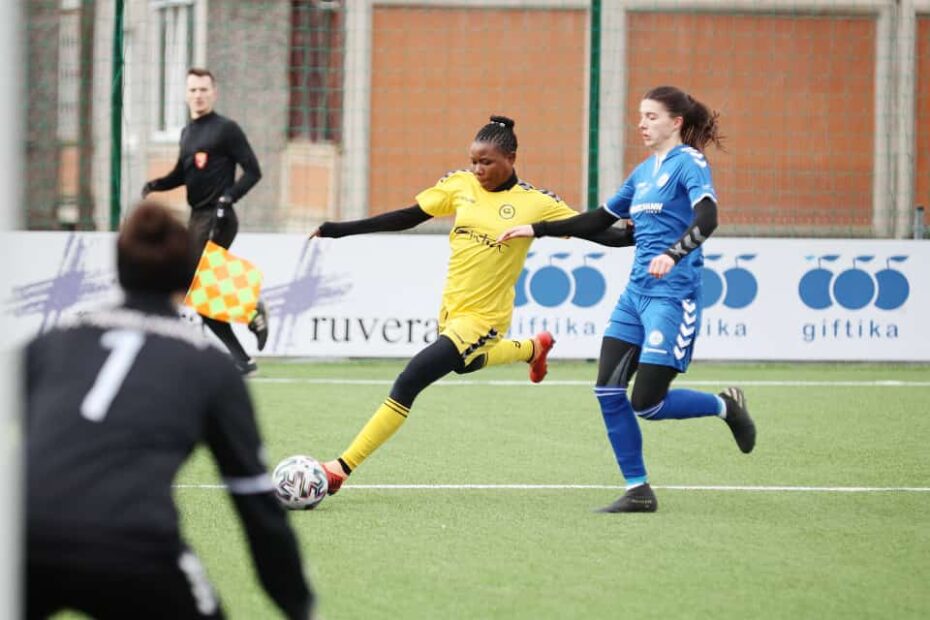 Former players of Rivers Angels Football Club Damilola Koku and Vivian Ikechukwu were the major influence in FC Gintra victory against SK Super Nova in the Baltic League.
Gintra started on a high note with a 11 – 0 demolition of SK Super Nova RTU.

Koku spotting jersey number 88 needed only the first half to complete a colossal damage to Nova by scoring four goals in the half.
The both sides were just settling down when koku calmly swept the ball first time high into the roof of the opponent net after grasping a well connected low cross from Vivian Ikechukwu to put Gintra ahead.
The both sides had hardly settled down as the goal came in the 1st minute.

She scored the second goal in the 24th minute , added one more goal after 10 minutes to make it 3 goals for her side.
Sk Super Nova – RTU were thinking of making sure the scoreline remains the same in the first half but Koku had a different plan by scoring her fourth goal in the 41st minute.

Fellow team mate Super Falcons Vivian Ikechukwu was not left out in the festival of goals as She scored a goal in the encounter and gave an assist with a low level cross for koku to make the first goal earlier in the match.

” I have waited to celebrate my first goal in my new team for a while. Thankfully not only did it come but it came four times in a single match”.

SK Super Nova got it wrong right from the beginning and we capitalised on it. We never looked back Koku explained further.

The match ended with a high scoreline of 11 goals to nothing.

The duo of Damiloa koku and Vivian Ikechukwu arrived FC Gintra Lithuania from the same club Rivers Angels on the same day and have both established themselves in the team. FC Gintra hopes to again nick a spot for the women’s champions league for the following season.