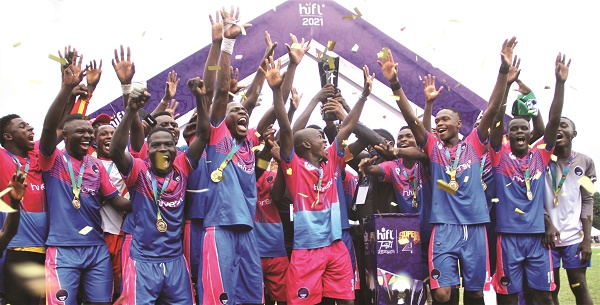 The University of Maiduguri (UNIMAID) soccer team, the UNIMAID Desert Warriors have emerged champions of the 2021 Nigerian Higher Institutions Football League (HiFL) after defeating debutant AAUA Luminaries from the Adekunle Ajasin University, Akungba, by 1-0 at a thrilling final played at the Yaba College of Technology Sports Complex, Lagos.
The game started at a fast pace with the AAUA Luminaries pushing hard to score the first goal. However, the defence of the Desert Warriors led by the Desert Warriors defence marshals- Abdulrahaman Musa and Ochei David Michael thwarted every move by the attacking front line of the Luminaries led by Ologbon Emmanuel and Rotimi Ayomide to end the first half goalless. On resumption of the second half, the Desert Warriors took the initiative and succeeded in the 62nd minute of the game when the team captain and StanbicIBTC Man-of-the-Match, Ochei Elijah Francis headed in a cross from the right to beat Isaac Phillip in goal for the Luminaries. The AAUA Luminaries turned on the heat on the Desert Warriors but it was too little too late as the Borno Boys held their nerves till the end of the game.
Victory for the Desert Warriors was a masterstroke pulled off by the University authority. Having identified the need for an experienced coach to thinker the team, the school management recruited a former Elkanemi Warriors FC star, Dauda ‘Ziko’ Daniel as the coach. Ziko revamped the team and molded them into a solid attacking team. The Dessert Warriors thrashed the Bayero University Kano (BUK) home and away in the round of 32 before dispatching the UAM Tillers 3-1 on aggregate in the quarters. FUTMINNA fell 3-3 on aggregate in the semi-final before beating the AAUA Luminaries 1-0 in the final match.

In his reaction, the Coach of the UNIMAID Desert Warriors, Dauda ‘Ziko’ Daniel, explained the strategy behind their victory. “We had a very good preparation from the beginning of this competition and we have been supported financially and morally by the school authority. This is the result of their support. At some point, my players, most of whom are visiting Lagos for the first time were jittery. However, I pointed at the trophy and told them that that is the sign of glory for them if only they could hold their nerves and win the match. It was difficult but we thank God”, he concluded.
Victory for the Maiduguri team brought temporary succor for a city under siege. On arrival in Maiduguri with the trophy, the champions were received by a cheering mammoth crowd at the Maiduguri International Airport before proceeding through the city with the trophy. The school authority also declared Monday a work-free day to celebrate the gallant warriors from the desert city.
Chatting with journalists after the game, the Chief Operating Officer, PACE Sports and Entertainment Marketing, Goodness Onyejiaku was full of gratitude: “We appreciate StanbicIBTC, Nivea Men, Bold and Minimie, and the Nigerian University Games Association (NUGA) for their support. We have all enjoyed this season and look forward to a more interesting HiFL in 2022”.

The UNIMAID Vice Chancellor (m) on hand to receive the victorious Desert Warriors on arrival at the Maiduguri Int. Airport.

Jubilant crowd celebrating the team’s victory on a victory parade round the city
Edwyn Evbie
BallNaija.com