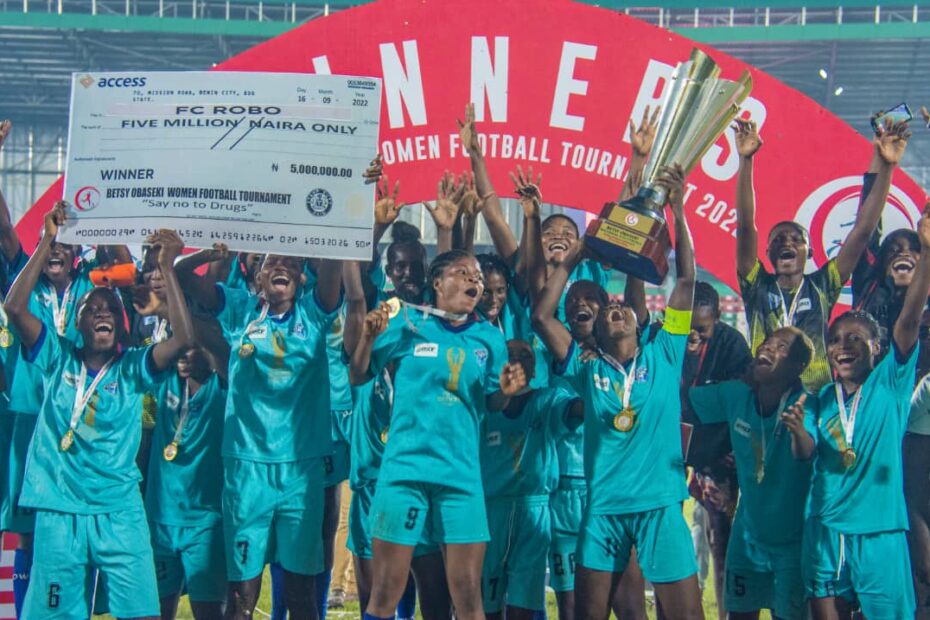 FC Robo Queens of Lagos on Friday won the second edition of the Betsy Obaseki Women Football Tournament, after recording a 1-0 victory over Edo Queens at the Samuel Ogbemudia Stadium, Benin.

Osahon, who was known for his convivial expressions throughout the tournament, smiles with glee as the team grabbed him and began to toss him gently into the air after the game.

Scenes of ecstasy spread around the Samuel Ogbemudia Stadium after the final whistle, as the fanfare continued despite the fact that the home team, Edo Queens failed to take the day.

The tournament, which is Nigeria’s only pre-season women football championship, is the brainchild of the Wife of the Edo State Governor, Mrs. Betsy Obaseki. The tournament themed, ‘Say No to Drugs’ is aimed at raising awareness on the adverse effects of drug abuse among youths.

“I am really, really happy,” We worked very hard for this and I think we deserve this. Edo Queens are a very good side and no doubt, gave us a lot of fight.

“I want to thank the Organisers and everyone involved in this tournament, most especially, Mrs Betsy Obaseki. This initiative is one we are all proud of. I am ontop of the world. I must confess.” He concluded.