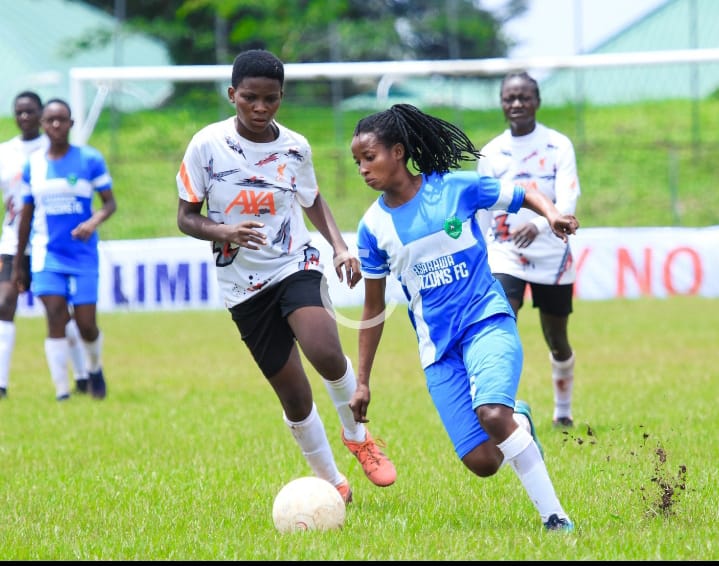 FC Robo defeated Confluence Queens 6-0 to pick one of the tickets for a Semi final slot at the on going Betsy Obaseki Women Football Tournament.
Nigeria Women Football League Premiership club, FC Robo Football Club of Lagos, made a feast out of the Lokoja-based club when they defeated them in one of the quarter final matches of the Betsy Obaseki Women Football Tournament going on in Benin City, Edo State.
Shukurat Oladapo opened the floodgate of goals against Confluence Queens in the 19th minute.
Rukayat Oladiti made it two in the 42nd minute before Favour Nwokocha converted the third goal in the 44th minute to give the Emmanuel Osahon-totured FC Robo a 3-0 lead at the end of the first half.
Kehinde Akinwande made it four goals to nothing with only ten minutes of play in the second half. While Taiwo Lawal scored FC Robo fifth goal in the 59th minutes. Taiwo Lawal again found the nets of Confluence Queens in the 77th to score a brace and FC Robo’s seventh goal to complete the routing of the fellow NWFL Premiership club, to book a place in the semi finals of the 2022 Betsy Obaseki Women Football Tournament.
FC Robo of Lagos will on Wednesday play in the semi final of the tournament against the winner of the Delta Queens of Asaba versus Royal Queens of Warri game.
Meanwhile, at the University of Benin, Ugbowo campus earlier on today, Nasarawa Amazons defeated Naija Ratels of Abuja 3-2 in the first quarter finals played at the Uniben Sports Complex. Nasarawa’s Aweda Titilayo opened scoring for the Lafia-based team in the 4th minute.
Hembaten Atatsea through a penalty kick made it goal number two for Nasarawa for the former champions to shoot into a 2-0 lead.
Dolapo Ariori in the 52nd minute reduced the tally for Naija Ratels, before Motunrayo Ezekiel in the 55th minute levelled scores for Naija Ratels.
Nasarawa Amazons winning goal was scored in the 73rd minute through club’s highest goal scorer last season, Dooshima Tarnum. Nasarawa Amazons will play the winners of the Edo Queens versus Heartland Queens quarter final in the Wednesday semis at the Samuel Ogbemudia Stadium.

Also at the Uniben Sports Complex, Edo Queens defeated Heartland Queens by 4 goals to nothing in the second quarter final match of Uniben venue.