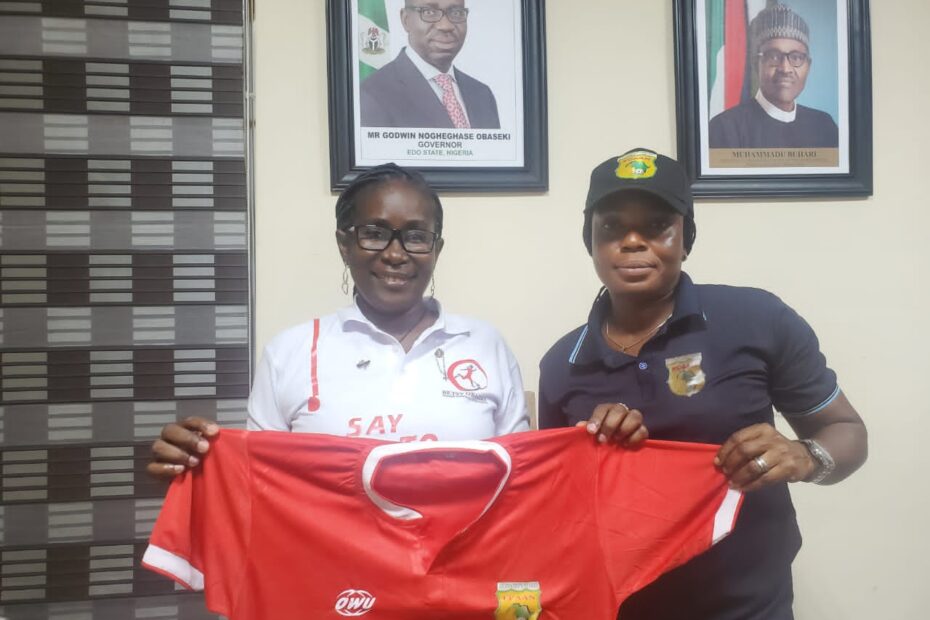 The Football Coaches Association of Africa Nations on Monday got a big boost ahead of the planned “F” Diploma Coaching Course scheduled for Benin-City, the capital of Edo State as the sports governing body in the state welcomed the group with open arms.

The Edo State Sports Commission, led by the Chairman, an Iconic Long Jumper and Nigeria National Record holder Yusuf Ali alongside the Permanent Secretary, Sabina Chikere, in a brief meeting, welcomed the FCAAN Coaches and Instructors to the state while promising total support for the coaching course by the state government.

“We are proud that a Coaching body like FCAAN has chosen our city for their Coaching Course. We are also happy to welcome Coaches from all over Nigeria to Benin-City. This is coming at a time we are also hosting the Betsy Obaseki Cup and don’t forget the NFF Elective Congress is holding here later this month. It is safe to say that Benin-City is now the football capital of Nigeria”, Sabina Chikere quipped.

The one day FCAAN F Coaching Diploma Course holds on Tuesday September 13th 2022 at the Samuel Ogbemudia Stadium, Benin with grassroot Coaches from Edo state and beyond already accredited for participation.

FCAAN, founded by Dr Terry Babatunde Eguaoje, a former Super Eagles technical crew member and present Consultant to the NFF on Coaching matters, is the world’s largest Football Coaches Association with over 45,000 members across the globe. Over the years, FCAAN have offered F, E, D and C courses in Nigeria to update Coaches on global best practices and exposure to current Coaching methodologies.

Several Coaches in the Nigerian league and in the national teams are holders of FCAAN Coaching Diplomas.